While living on his farm in Paris, Mississippi 10 years ago, author Ace Atkins created the character Quinn Colson, whose story is told in a series of 10 novels that feature North Mississippi as the backdrop.

Leaving his one-dimensional form, Quinn Colson will soon come to life on the television screens of homes all over the world.

Earlier this month, HBO announced they were creating a new television series based on Atkins’ Quinn Colson series.

“There are so many ways you can go with Hollywood, and I’ve been down some back roads,” Atkins told Hottytoddy.com recently. “But HBO is the absolute best in the business, and I’m thrilled they wanted to adapt my books for television.”

It’s not the first time one of Atkins’ books has made it to the screen. His book, “Wonderland,” was turned into the film “Spenser Confidential” for Netflix.

“I had absolutely no say in the adaptation or how that story was told,” Atkins said. “I can’t discuss many details but the writer/director on the Quinn Colson show is just terrific and a true pro. I’ve been in constant contact as they worked on the scripts for the first season and they want everything to have the same feel as the novels, with the grit and the humor intact.”

Colson is a former Army Ranger who returns to his home in rural northeast Mississippi. Upon returning, he discovers that where he grew up has been overrun with corruption, drugs and violence. 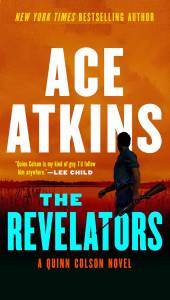 Atkins said while details are still being discussed with HBO, current plans are to have five seasons.

“Each season would tell the story from two of my novels in the order they’ve been written,” he said. “The final season would take on the events of ‘The Shameless’ and ‘The Revelators.’ I have to admit, I’ve known about the HBO deal for a while now and wrote ‘The Revelators’ as the end game for the TV series. This novel brings together a lot of storylines from the series.”

The idea for the first book came to Atkins while visiting Calhoun County and noticed a similarity to the Old West. Akins developed Quinn Colson by using the classic “hero returning home from war” character.

“It’s a tale as old as ‘The Odyssey,’” Atkins said. “But Quinn is so many people from Buford Pusser, to James Garner, to Billy Jack, to the original U.S. Army Ranger who helped me with his accurate background.”

Atkins said his goal in writing the Quinn Colson series was far more than just telling a good story.

“The idea was to tell a story set in Middle America – the Deep South – that took on real issues and the current state of affairs,” he said. “I’m proud that my Quinn Colson books celebrate what’s great about the South but also reflect many issues here in North Mississippi. Corruption. Racism. Hypocrisy. We have a pretty full dance card.”

While the books are based in north Mississippi, Atkins said he wasn’t sure where the folks from HBO will decide to film the show.

“I will definitely advocate for North Mississippi, as this area has a very specific look and feel that’s present in the books,” he said. “It seems every show that is set in the South has to have old oaks dripping with Spanish moss – even though much of the South doesn’t look that way at all. I would hope we keep the filming to North Mississippi to make sure everything is true and accurate. But ultimately, it’s not my call.”

When Atkins starting penning the words, Quinn Colson took on a life of his own and emerged a hero to his creator.

“Right now, this country seems to be split on what exactly are American values. To me, it’s as clear as what I learned on the ‘Andy Griffith Show’ – tell the truth, don’t cheat, and respect other people. Doing anything else is a disgrace to what people like Quinn have fought and died for. He’s like Will Kane in ‘High Noon’ standing up for what’s right while many cower in the shadows. No one should be OK with racism and public officials lining their pockets.”

For those who read the Quinn Colson books, and those who will watch the HBO series, Atkins hopes his stories help fans come away with a better understanding of the Deep South.

“It’s much more complex than outsiders want to believe,” Atkins said. “It’s a beautiful place filled with a lot of great people who’d give you the shirt off their backs. But it’s also rampant with political and moral corruption, hypocrisy and poverty. I don’t pull punches. I write the good, the bad and the ugly as I see it.”

While the HBO series is months, if not a year or more away, the newest book in the series, “The Revelators,” is where his focus is currently.

“The fun for me has been writing about one place, one county in Mississippi, and seeing it grow and change over the years,” he said. “People get older, new people come to town. Keeping these stories relevant and fresh makes me excited about the next 10 years.”

Atkins has been nominated for every major award in crime fiction, including the Edgar Allen Poe Award three times (twice for his Quinn Colson novels). A former newspaper reporter and SEC football player, he also writes essays and investigative pieces for several national magazines including “Time,” “Outside” and “Garden & Gun.”

He lives in Oxford with his family, where he’s a friend to many dogs and several bartenders, according to his website.

It was announced on Tuesday that Ole Miss assistant coach Joe Jon Finley has accepted a new position at the University of Oklahoma as...
Read more
Government

Dog owners who bring their fur babies to county property located inside the city limits of Oxford must now have their pet on a leash.
Read more
Football

Fresh off of a 26-20 Outback Bowl win, the Ole Miss Rebels are looking to prepare for spring football, which is right around the...
Read more
Latest Videos