Allen Boyer: Review of “Race of Aces,” by John Bruning 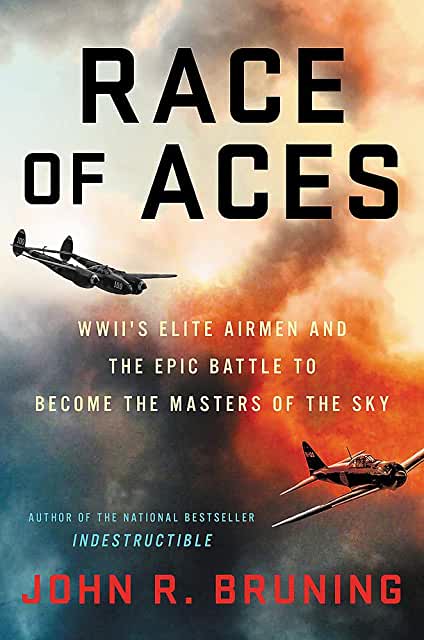 Bong finished the war with 40 victories, ahead of Tommy McGuire (who shot down 38 Japanese warplanes, almost overtaking Bong), Charles MacDonald (27 victories), Gerry Johnson (22), Neel Kearby (22), and Thomas Lynch (20).  This tally represented whole squadrons of Japanese warplanes, shot out of the sky by American fighters – but the flyers paid a heavy price.

As Bruning somberly warns:  “Risk defined the race of aces in a combat environment where the men already lived on a razor’s edge.  In the sky over New Guinea, the margin for error was so thin that a tiny oversight, a moment of ambition, a lapse in judgment or priorities got people killed.”

Thomas Lynch died because he made a second strafing pass in range of Japanese anti-aircraft gunners.  Neel Kearby was shot down when he tried for a second kill above a Japanese stronghold.  Tommy McGuire crashed while doing something he had warned other Americans never to do – trying to out-turn a nimble Japanese fighter, while carrying full drop tanks,  an extra thousand pounds of gasoline.  Even for Dick Bong, who made it home, a test pilot’s fate waited.  He died in the crash of a jet, on the day that an atomic bomb destroyed Hiroshima and helped bring the war to a sudden end.

Allen D. Boyer is Book Editor of HottyToddy.com.   A native of Oxford, he is the author of “Rocky Boyer’s War: An Unvarnished History of the Air Blitz That Won the War in the Southwest Pacific,” based on the Pacific War diary of his father (Naval Institute Press).