Allen Boyer: Review of “The Mirror & the Light” by Hilary Mantel 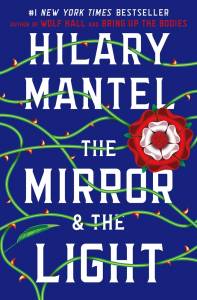 “The Mirror & the Light,” by Hilary Mantel, concludes a brilliant trilogy of historical novels that revolve around Henry VIII’s most cunning and loyal minister. It covers the period from May 19, 1536 to July 28, 1540, opening with Anne Boleyn’s execution and ending on the morning when Thomas Cromwell goes to the headsman’s block himself.

Once again, the skills of a very able novelist have been employed in the service of history.  Mantel writes with verve, and packs irony and suspense into a story with which most readers are at least generally familiar.

As King Henry’s right-hand man, Cromwell must handle the ceaseless daily business of government while trying to play a many-sided long game – for his king, for himself, for his

son Gregory, for the young Protestant faith.  The book runs chronologically, but the narrative swings back and forth, governed by psychological time.  The story often looks back, as Cromwell recalls his mentor Cardinal Wolsey and his own early years in Italy.  Allusions suggest the future: to Shakespeare, Hobbes, even the obsequies for Princess Diana.

“The Mirror & the Light” is 757 pages long – 200 pages longer than “Wolf Hall,” a full 350 pages longer than “Bring Up the Bodies.”  Yet, it reads briskly.  The dialogue is crisp.  Every scene is tightly scripted. Irony relieves tension, or casts facts in a ghastly new light. The book is long not because it sprawls, but rather because the author refuses to pare down the story. In stretching her narrative, Mantel makes space to give the Tudor age its due.

The book opens with a seven-page roster of dramatis personae, very few of whom are flat rather than rounded. It is through her characters (rather than, say, long passages of exposition) that Mantel works in history. In particular, the younger men-of-business who share Cromwell’s confidence – Thomas Wriothesley, Rafe Sadler, Thomas Wyatt – are each fully realized characters; and they deserve no less, for each left his distinctive mark on English history.  Little direct evidence survives of what Thomas Cromwell thought or felt, but much can be inferred.  In Wriothesley, Sadler, and Wyatt, we see a conservative Lord Chancellor, a radical Privy Councillor, and the man who refigured the Petrachan sonnet to make it fit the English language.   A statesman who managed such protégés is a man of remarkable ability.  To say less about Wriothesley, Sadler, and Wyatt would say less about Cromwell.

Cromwell’s enemies are also carefully, individually drawn.  No reader will mistake the bluff Duke of Norfolk for the cunning Stephen Gardiner. Their differences underline the complexity and treachery of Tudor power politics.  So does the long shadow of Sir Thomas

More, who reaches out from the grave to strike one last merciless blow against heresy.

The character who most often wakes up the narrative is the tart-tongued Jane Boleyn, Lady Rochford, Cromwell’s confidante in the chambers of three queens.  Once a lady-in-waiting to Anne Boleyn, her sister-in-law, Lady Rochford has stayed on in royal service, even after the executions of her sister-in-law and her own husband.  She will stay on longer, long enough to entangle herself fatally with Catherine Howard, Henry’s fifth wife – a future that gives Lady Rochford’s comments a sardonic overtone.

Quietly but consistently, Cromwell backed preachers who inveighed against the medieval church and its shortcomings.  Blending exposition with reverie,  Mantel imagines his scorn for the old order and his hope for a brighter new world.

“The king will no longer countenance subversion of his rule, or the existence of men who lie awake in their plush curtained lodgings and dream of Rome. Thousands of acres of England are now released, and the men who lived on them dispersed to the parishes, or to the universities if they are learned: if not, to whatever trade they can find . . .  .

“Let us bury them once and for all, the skeletons of mice that mingle with holy dust; the ragged pieces of your tunics, your hair shirts clumped with blood . . . .  Glastonbury Tor is over five hundred feet high.  You can see for miles.  You can see a new country if you look, where everything is fresh, repainted, re-enameled, bleached, scrubbed clean.”

“Wolf Hall” and “Bring Up the Bodies” each earned the Booker Prize, Britain’s equivalent of the Pulitzer.  Whether or not “The Mirror & the Light” receives the same honor, it offers a worthy conclusion to Mantel’s trilogy.

Allen Boyer is Book Editor of HottyToddy.com. A native of Oxford, he is the author of “Sir Edward Coke and the Elizabethan Age,”  and is currently at work on a history of the law of treason. A previous version of this review was published in the Phi Beta Kappa Key Reporter.

Dog owners who bring their fur babies to county property located inside the city limits of Oxford must now have their pet on a leash.
Read more
Athletics
00:03:48

By John Macon GillespieContributorhottytoddynews@gmail.com https://youtu.be/BTi9xSEpJgQ COVID-19 has affected almost every industry and walk of life, but some of those most affected by the pandemic are those...
Read more
Government

The Lafayette County Board of Supervisors unanimously approved placing a marker that notes the seven known instances of lynching in the county on the...
Read more
Latest Videos