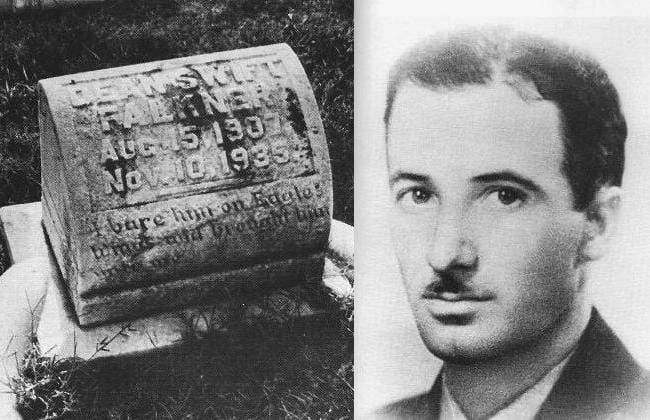 Dean Swift Falkner, the youngest of the four Falkner brothers, was born in 1907. The family nurse, Mammy Callie, gave him his family nickname, “Deanie.” He was so much younger than his brothers that he was not able to keep up with them until years later, and thus did not share their reputation as being a tightly knit, tough threesome. The brothers however, doted on Dean and
delighted in playing with him. All his life, Dean’s special gift for living served as an inspiration for the whole Falkner family.
Dean Faulkner was killed on November 10, 1935, in the plane William Faulkner had given him. He was 28 years old. With him were several passengers, one of them a student-pilot who was thought to be practicing at the controls when the plane crashed near Thaxton, Mississippi. Dean’s death was an irreparable lose for the family, and William felt partially responsible because he urged Dean to become a pilot.
Dean was buried in the family plot in St. Peter’s Cemetery in Oxford. William assumed all responsibility for the funeral arraignments, including the inscription on his brother’s tombstone. From his novel ‘Sartoris,’ William took the epitaph for the fictional pilot, John Sartoris, who also died in a plane crash:
“I bare him on eagles’ wings, and brought him unto me.”