The Music of Andrew Fox 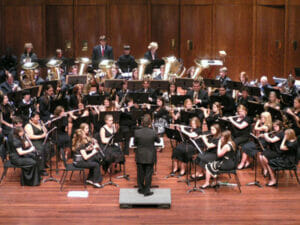 On Thursday, November 15, the University of Mississippi Wind Ensemble presents “The Music of Andrew Fox” at 8 p.m. in Nutt Auditorium. Admission is free.
Dr. Andrew Fox is a native of Oxford, an Ole Miss graduate and taught 32 years in the Department of Music at the university. Dr. Fox was a band student in the Oxford public school band program under the direction of Mr. Bob Work and was a trumpet player in the first Mississippi Lions All-State Band in 1950.
Fox is a prolific arranger with hundreds of marching band, concert band, jazz band, choral, orchestral and ensemble arrangements to his credit. He was staff arranger for the Ole Miss Marching Band in the late 1960s through the mid-1970s. During this time, he wrote every arrangement the marching band performed. Fox also has composed many original band compositions, of which many have been published and performed by bands across the nation. Several of his arrangements and compositions were written for the Lafayette/Oxford/University Community Band which performs at the Fourth of July celebration in Oxford each year. Fox is still an active arranger, composer and musician, playing keyboards in many different bands in the Mid-South area.
The Oxford Eagle March was written for the L.O.U. Community Band in honor of the Oxford hometown paper, just as John Philip Sousa wrote the Washington Post March for that publication. Fox also wrote the Double Decker Overture to start the Oxford Double Decker festival with the community band as the first performance on the square for the event. His “Lamar Street Parade” was written to commemorate the main street in town. “At The Races” March was written based on a scene from a film based on William Faulkner’s book “The Reivers”. In the movie there was a comedic scene featuring a horse race in the center of town. “At the Races” is written in a musical style known as a “Galop” and was inspired by this scene. Dr. Fox has been a player in the community band for years and served as its director for many years.
Former Ole Miss students and Jazz Hall of Famers Calvin Flint and Danny Blurton will also perform with the University Band playing arrangements of Andrew Fox’s. Blurton will play an arrangement of Jerome Kern Jazz standards while Flint will entertain the crowd with an arrangement of Mason Williams’ “Classical Gas”, a popular guitar solo that made the Billboard top forty in the late 1960’s

Allen Boyer: ‘The Life of William Faulkner,’ by Carl Rollyson