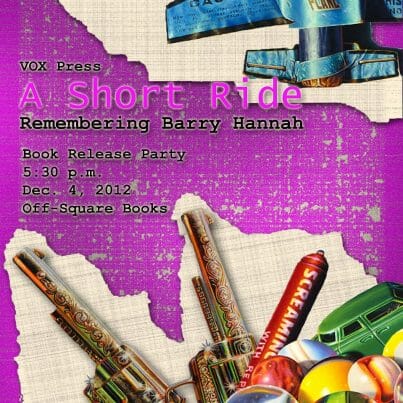 To say that Oxford, Mississippi, has had its share of characters isn’t explanation enough.The list is almost never ending. My grandfather’s good friend, William Faulkner, was the most famous one outside of Oxford. Faulkner stories are still being told from Paris to New Orleans to Hollywood. Willie Morris and his Black Lab, Pete, late comers to Oxford, were two more. Locals like Mr. “Shine’ Morgan and his son, Ed Morgan, Mr. Motee Daniels, L.W. Thomas, Ron Shapiro of Hoka fame and many more will always be part of Oxford lore. When naming names, Barry Hannah cannot be left off the list. I once saw Mr. Hannah directing traffic on the Square with a pool cue. There are a lot of great Barry stories. But the absolute best Hannah stories are the ones he wrote.
Howard Barry Hannah of Oxford, Mississippi, was the author of nine novels and four short story collections. Hannah worked with notable American editors and publishers such as Gordon Lish, Seymour Lawrence and Morgan Entrekin. His work was published in Esquire, The New Yorker, The Oxford American, Southern Review, and a host of American magazines and quarterlies. His first novel, Geronimo RexAirships, his 1978 collection of short stories about the Vietnam War, the Civil War, and the modern South, won the Arnold Gingrich Short Fiction Award. The following year, Hannah received the prestigious Award in Literature from the American Academy and Institute of Arts and Letters. Hannah won a Guggenheim, the Robert Penn Warren Lifetime Achievement Award, and the PEN/Malamud Award for excellence in the art of the short story. He was awarded the Fiction Prize of the Mississippi Institute of Arts and Letters twice and received Mississippi’s prestigious Governor’s Award in 1989 for distinguished representation of the state of Mississippi in artistic and cultural matters. For a brief time in 1980, Hannah lived in Los Angeles and worked as a writer for the film director Robert Altman. He was director of the MFA program at the University of Mississippi, in Oxford, where he taught creative writing for 28 years. Barry Hannah died on March 1, 2010, of natural causes.
Characters are known for their great quotes and here are a few examples of “Barryisms.”
–Barry Hannah: “You’ve got to lie to stay halfway interested in yourself.”
― Barry Hannah: “The point is to strip down, get protestant, then even more naked. Walk over scorched bricks to find your own soul. Your heart a searching dog in the rubble.”
― Barry Hannah: “Where is the angry machine of all of us? Why is God such a blurred magician? Why are you begging for your life if you believe those things? Prove to me that you’re better than the rabbits we ate last night.”
― Barry Hannah: “A man’s got to do what a man’s got to do. A woman must do what he can’t.”
A Short Ride: Remembering Barry Hannah (Nautilus Publishing, $19) a book of essays remembering the life and work of Hannah, will be released Nov. 26. Contributors will appear throughout Mississippi to read from the anthology. Editor Louis Bourgeois said, “We expect to have Barry Hannah’s son Po at the Oxford event, as well as several contributors, including Jim Dees, Ron Shapiro, Glenray Tutor and Neil White.The Oxford event will take place on December 4, at Off Square Books in Oxford, beginning at 5 p.m.