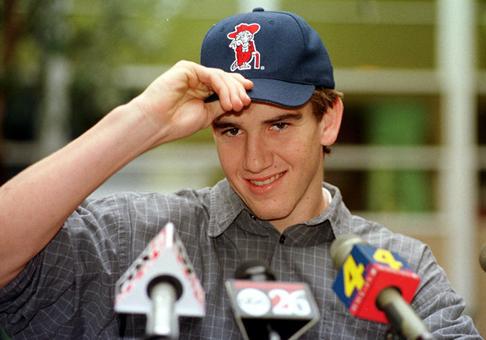 Eli Manning was born an Ole Miss Rebel. His father an All-American Ole Miss quarterback and his mother an Ole Miss Homecoming Queen. In the summer of 1998, Eli attended a football camp at Ole Miss, a move that fans took as an indication of his desire to become a Rebel. But the teenager was still undecided. In the midst of the recruiting frenzy, Eli enjoyed a great senior year at Newman. Again he quarterbacked the team to the playoffs and ended his high school career with 7,389 yards, 200 yards more than Peyton. As the clock ticked away on his college decision, Eli received an interesting call from David Cutcliffe, the new head coach at Ole Miss. Eli knew how much Cutcliffe had done to help Peyton improve his game. The news that he was now in charge of the Rebel program was all Eli needed to hear. The 18-year-old followed his father’s footsteps and made his way to Oxford. The school offered to un-retire Archie’s number 18, but Eli declined. He took #10, saying he wanted to be his own man.