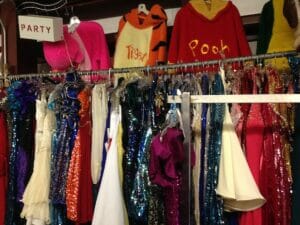 It’s that time of year again. Halloween is upon us. It’s time for children and adults to pull out their carefully thought out costumes and hit the town in search of candy and mischief. Get ready to see ghosts, witches, Superman, and… Si Robertson?

That’s right. The Duck Dynasty cast members have been extremely popular costume choices since the show’s premiere in 2012. It is the most watched TV show on cable, afterall.

“I can’t understand why,” said Jo’s Costume Shop owner Jo Prewitt. “But I’ve ordered a lot of beards and Duck Dynasty hats. I think the boys like it because it’s so simple.”

Jo’s Costume Shop is a staple in Oxford known for its wide selection of get-ups (more than 4,500 costumes). Prewitt has had a love for costumes for as long as she can remember. She says she has been “living and breathing costumes” since her sons were 4 and 8. The boys are now 51 and 54. She began by sewing costumes herself, but eventually began to buy them. She’s since bought out more than four costume shops and numerous movie wardrobes.

“I just love them,” said Prewitt. “I was raised with them and back in the 40’s you could just buy them at Sears and Roebuck.” While Prewitt does try to keep up with the current costume trends, she says that some costumes remain popular year after year. Costumes like policemen, Indians, Marilyn Monroe, and superheroes are classics. While some costumes come and go, Prewitt has noticed that the looks people go for tend to stay the same.

“The girls want to be sexy and the boys want to be funny,” said Prewitt. “No one really wants to be scary anymore.”

The day of Halloween is a huge rental day for Prewitt, but the entire month proves to be quite profitable with the explosion of sorority and fraternity theme parties. “They have 50’s parties, 60’s parties, 70’s parties, Great Gatsby parties, they’ll find any excuse to party,” said Prewitt.

Prewitt’s love for costumes is what originally drew her to the business, but it’s something else that keeps her going. “I love the costumes, but it’s the fun of it that I really love. Year after year I do it for the laughter I hear when people walk through and try stuff on. It’s that laughter I really love.”

For those still looking for costume ideas, browsing the internet is great for suggestions. According to NJ.com, Ninja Turtles and Power Rangers are really big for kids this year. As for the adults, BusinessInsider.com projects that Miley Cyrus’ VMA performance look will be the #1 costume of 2013. 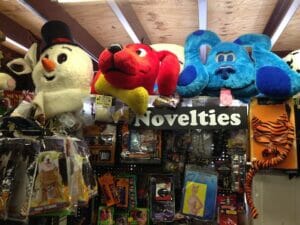 If you’re in the Oxford area and want to browse through Jo’s Costume Shop’s endless selection, they are located at 2526 East University Avenue and are open Monday-Friday from 9 a.m. – 4 p.m. Adult costume rentals are $28.99 (except for mascots which are $54). During Halloween season, rentals are for 1-day unless they are weekend rentals. Children’s costumes are for purchase only.