Zachery Callicutt, a freshman at Oxford High School and a member of Troop 45, became an Eagle Scout in ceremonies held at First Presbyterian Church on Sunday. Participating in the award ceremony were his parents, Warren and Lynn Callicut.

Zach earned 57 merit badges, twice the number required for the Eagle award, is a member of the Order of the Arrow where he serves as Vice Chief.  He has held the rank of Assistant Patrol Leader, Patrol Leader in Troop 45 and participates in Venture Scouting.

For his Eagle Project he collected over 1000 cans of food for the Oxford-Lafayette Pantry through collection programs held at his school, church and local merchants.  Sponsored by the First Presbyterian Church, Troop 45 has had a record number of Eagles recently with some six Eagle awards being made during the Fall semester. 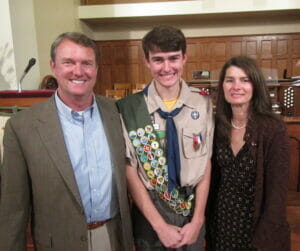