April 25, 2014
0
575
The late author Willie Morris once said “Mississippians may not be able to read, but we sure can write.”
It was a reference to the unusually large number of notable authors coming from a state known for having a high illiteracy rate.
I was looking over Mississippi’s PSAT scores and found some amazing numbers. Mississippi has fewer top scorers on the PSAT than the South and nation, but Mississippi simply blows out the competition when it comes to the writing section. 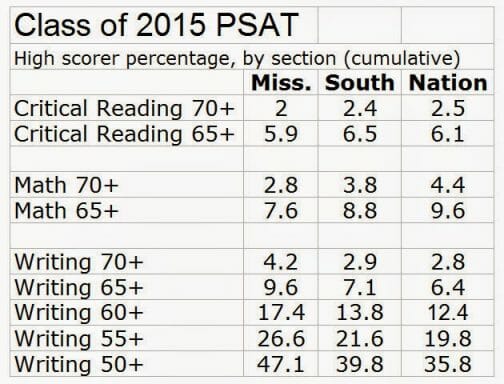 The chart I’ve presented is for the most recent scores only, but this isn’t a one-year phenomenon. You can look at the scores yourself by clicking here. I consider myself fairly well informed about these types of tests, and I can’t come up with a good reason why Mississippi’s PSAT writing scores should be substantially higher than the regional and national average while our state our state has fewer top scorers in the reading and math sections.
One could argue that fewer Mississippians take the PSAT in comparison to the nation at large, so that our test pool is composed of more able students. This is almost certainly true, but it doesn’t explain the discrepancy between the reading, math, and writing scores. And the fact that 47.1 percent of Mississippians scored a 50 or above compared to 35.8 percent nationally is a huge and significant test gap.
It should be noted that Mississippi’s average reading and math PSAT scores are actually slightly higher than the national average; this is likely due to only better Mississippi students taking the PSAT to begin with — fewer than one in four juniors takes the PSAT. But Mississippi produces a smaller percentage of high to very-high scorers in reading and math despite its elite testing pool.
I don’t have any answers, but I certainly found this interesting. My guess is that most people could care less.
Courtesy of Frank Hurdle. Hurdle is a graduate of Ole Miss and the Ole Miss Law School He was the 1987-88 editor of The Daily Mississippian. Contact him at frankhurdle@hurdlelaw.com