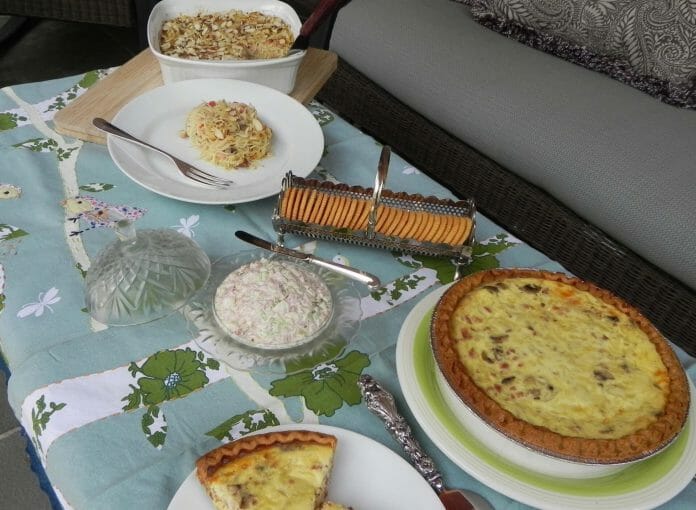 By Laurie Triplette
ldtriplette@aol.com
Southernism of the Week
A tad bit: A classic Southern measurement, equivalent to smidge or smidgen, meaning just a teensy weensy bit more or less. Said to have originated in the last quarter of the 19th century, possibly as a shortened reference to a tadpole as a yet-unformed person. Popularized nationwide by the mid-20th century.
THE BUNNY’S GONE BYE-BYE, THE PIGGY LINGERS …
The last notes of the trumpets have died away and the angelic choral music has risen into the ethos. Those dyed and decorated eggs have been deviled and consumed. The chocolate bunnies have been gobbled up or melted or at least lost their ears. Families unified for the Easter holiday have scattered once again. But in many Southern households, the leftover Easter ham is still hanging around.
What to do what to do…
FYI, forget the lamb. We mid-South natives rely on ham as the go-to Easter meat. And over the centuries, we have created hundreds of dishes to use up those leftover bits and pieces of Easter ham. Most of them are delicious. 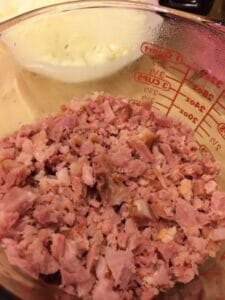 Newcomers to the wonderful world of pork might not know that ham is the hind leg of a pig. Hams generally are cured or cured and smoked. The curing process is either wet, involving brines, or dry, involving salt or sugar rub and smoking to remove all the moisture. Wet-cured hams are called city hams. Dry-cured hams are called country hams. Labels referring to the meat as a picnic ham are inaccurate. Boiled ham has been boned, cured and cooked in a boiling process. It is ready to eat without further cooking. A picnic cut is a cured cut from the lower portion of the pig shoulder.
When considering whole versus half a ham, recognize that a whole ham generally weighs 10-12 pounds, and is divided into two parts — the shank and the butt. The butt half comes from the top half of the hind leg. The shank half comes from the lower half of the hind leg. The butt half has more fat but generally is meatier. The shank half is harder to carve, less fatty, but sweeter than the butt half.
One may purchase any cut of ham with bone-in or boneless (boned). Bone-in hams serve two to three people per pound. Boneless hams serve four to five people per pound. If you intend to feed fewer than 10 people, buy half a ham.
Ready-to-eat ham is fully cooked. In recent years, commercially prepared spiral-sliced baked hams have become popular. Think Honey Baked Ham and its many competitors. I highly recommend them all!
Partially cooked ham or “cook before eating” is ham that has been cured but requires cooking. Fresh ham is completely uncured (and they must be special-ordered). To prepare any partially cooked or fresh ham, the internal temperature must be cooked to 160˚F. Allow 17 to 20 minutes per pound. Fully cooked hams should be heated to an internal temperature of 140-150˚F to achieve maximum flavor.


When buying partially cooked or fully cooked ham, look for a ham that is bright grayish pink in color, with firm texture. Avoid ham that appears slimy or iridescent. If it smells, don’t buy it (or throw it away). The fat on the outside of the ham should be white. If it has yellowed, the ham is probably spoiled.
For food safety, keep ham in its original packaging until ready to cook. Store it in a larger bag to prevent contamination of other foods in the fridge. A fully cooked ham will keep in the fridge for several weeks when wrapped properly. Freezing it is not recommended. Uncooked pork of any sort should be used within 3 days of purchase, and should be stored in the fridge at a temperature below 40˚F.
At any rate, the week following Easter, your cooked ham leftovers should still be viable for repurposing. The Old Bride’s Honey Baked Ham (bone-in of course) yielded about 4 cups of chopped leftovers, PLUS a meaty ham bone. I shrink-wrapped the bone and stuck it in the freezer to be used in simmering a future mess of greens or beans. Yum.
HAM AND MUSHROOM QUICHE

This is a classic quiche pie, and may be modified to taste by adding chopped steamed asparagus, or pimento.

Line two pie pans with pastry, or use frozen pie crusts, pricking bottoms with a fork to prevent puffing. Bake at 425ºF in preheated oven for 10-12 minutes.
Mix the creams, cheese, salt and pepper with a wire whisk, whisk in the beaten eggs, and set aside. In a 10-inch skillet melt the butter over high heat. Add the onions and mushrooms, salt and pepper, cooking until tender, about 5 minutes. Stir in ham and dash of cayenne to mix. Pour into the cream mixture. Pour mixture into partially baked pastries.
Place pies on a large cookie sheet and place on center rack of preheated oven set at 425˚F. Bake for 15 minutes, lower heat to 350ºF and loosely tent with a large sheet of foil. Bake additionally for 35 minutes to 1 hour, until knife inserted in center comes out clean. Remove to rack and allow to set up for 10 minutes before cutting.
OLD FASHIONED HAM SALAD 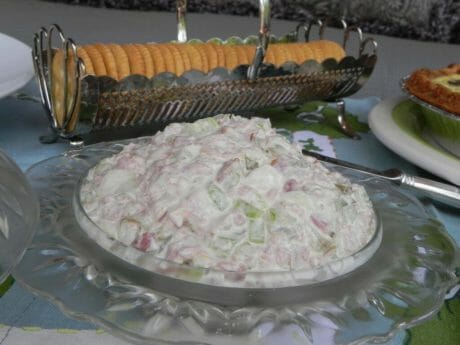 The classic ham salad is similar to a chicken salad. I prefer to fine-chop the leftover ham, but feel free to run it through a food grinder or processor— but if you do, be sure to add more ham to increase the volume. By the way, I made up a tad bit of ham salad, but feel free to multiply recipe according to how much ham you use.

Combine all ingredients in bowl. Refrigerate at least 2 hours. Serve as a scoop on lettuce leaf, or stuffed into a tomato, or with crackers. OPTIONAL: Add one chopped hard-boiled egg.
VARIATION: Omit pickle relish and add a dash of hot pepper sauce and a dash of garlic powder. Puree ingredients to create a deviled ham spread. Yields about 1-1/2 cups without egg.
HAM TETRAZZINI

Just as tasty as chicken tetrazzini…

Sauté onion and mushrooms in the butter, Stir in flour until it forms a thick paste. Gradually stir in milk to form a sauce.
Add pimento, ham and optional bacon. Stir in cheeses and spices.
Pour over cooked pasta in large bowl and fold until completely blended. Cut pasta three times while folding with sauce. Pour into a greased 8-by-8-inch deep-dish casserole pan. Sprinkle almonds over top.
Bake at 350˚F in preheated oven for 20 minutes. Yields about 8 servings.
Laurie Triplette is a writer, historian, and accredited appraiser of fine arts, dedicated to preserving Southern culture and foodways. Author of the award-winning community family cookbook GIMME SOME SUGAR, DARLIN’, and editor of ZEBRA TALES (Tailgating Recipes from the Ladies of the NFLRA), Triplette is a member of the Association of Food Journalists (AFJ),Southern Foodways Alliance (SFA)  and the Southern Food and Beverage Museum (SOFAB). Check out the GIMME SOME SUGAR, DARLIN’ web site: www.tripleheartpress.com and follow Laurie’s food adventures on Facebook and Twitter (@LaurieTriplette).