Any true nerd (or human, for that matter) has big plans for this Sunday, May 4th. And not because it is Cinco de Mayo Eve. It’s Star Wars Day! And there is plenty to celebrate this year following the announcement that the Walt Disney Company is producing a Star Wars Episode VII with six original cast members! 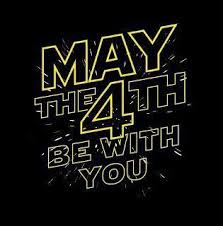 JJ Abrams will direct Harrison Ford, Carrie Fisher, and Mark Hamill in their roles as Han Solo, Princess Leia, and Luke Skywalker respectively. The sequel to the original trilogy will open in theatres on December 18, 2015.
But, how did Star Wars Day start, anyway?
According to my informal research via Google, many sources claim that Margaret Thatcher actually coined the phrase May the Fourth Be With You. On May 4, 1979, Thatcher was elected Britain’s first woman prime minister and her party placed a newspaper ad to congratulate her. The ad, which ran in the London Evening News, read “May the Fourth Be With You, Maggie. Congratulations.”
In the spirit of a new fantastic movie and one of the world’s best holidays, here are three ways to celebrate Star Wars Day 2014:
1. Host an original trilogy marathon (If you know where to live-stream these theatrical masterpieces, hit up your girl! Netflix and Amazon Prime have failed me.)

Star Wars Day is also a good excuse to rest up before you rage on Cinco de Mayo (because Margarita Monday is going to be awesome this year)!
– Kate Wallace is managing editor of HottyToddy.com, who’s husband is a Star Wars Baby. She can be contacted by emailing kate.sinervo@hottytoddy.com.