The Goose Creek Club tennis staff will be offering Summer Camps for kids from 6-years-old to high school players. Camps will be offered on a weekly basis, Monday through Friday, starting the week of June 2nd. GCC will hold the class ratio to no more than six students to one teacher, therefore there is limited space available.
These classes will be for the beginner to intermediate level players. Classes will focus on proper stroke production,court positioning, footwork and tennis etiquette. As the students progress and as needed, there will be point situations and court strategies incorporated into the lessons.
GCC will use the Quick Start balls and the corresponding court size for each age group. 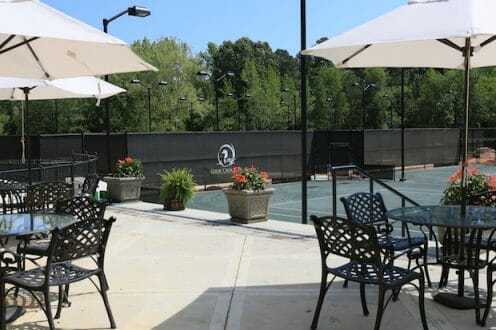 Advanced Training Camps programs schedule will be announced soon!
Call 662-380-5055 to sign-up today!
[dhr]
Goose Creek Club Tennis Staff and Lesson Prices
General Manager/Tennis Director: Barney Chadwick, USPTA I
Barney along with his twin brother Billy, have been a driving force in Mississippi tennis for the past 30 years. Chadwick is former Ms Junior Champion and served as General Manager & Tennis Director at the prestigious River Hills Club in Jackson for 13 years. He has directed 100s of USTA sanctioned events including the $25,000 USTA Women’s Challenger Tournament in Jackson for 10 years.
Staff
Mike Bryan, USPTA I
Mike has over 25 years experience as a tennis professional, including 7 years as the Head Pro at the prestigious New Orleans Lawn Tennis Club. He has an impressive history of developing & coaching southern and nationally ranked players including former Ole Miss star Courtenay Chapman. As a junior Mike was nationally ranked and after college played professionally in Europe.
After his playing career he trained with and coached former top 10 player in the world Chanda Rubin. Mike comes from a very well-known and prominent family in the tennis industry.
Mike was recently honored to be selected as one of the USTA coaches at the National Junior Championship Event held in Mobile.
Bo Petro, USPTA I
Bo played collegiate tennis for the University of Mississippi. As a junior he was Mississippi Junior Champion & won the National Interscholastic Tennis Singles Championship title. Bo was former Head Tennis Professional at Cypress Lake Club in Ridgeland,Ms & at Reunion Country Club in Madison,Ms.
Bo has taught many outstanding junior players including Mississippi Champion and Nationally ranked Ellie Yates, who now plays for Sanford University in California.
Lesson Prices

Click Here for more info about the Goose Creek Club of Oxford.