A pictorial History of the Thompson House 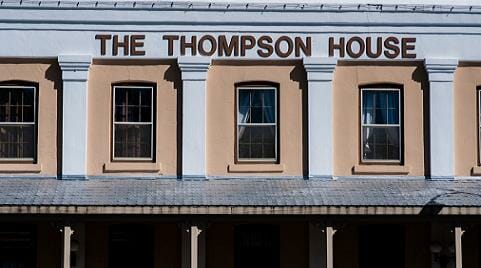 The Thompson House was the first hotel built in Oxford after the Civil War.
It was built on the site of the Oxford Inn, originally constructed by Charles George Butler, great-grandfather of William Faulkner. The Oxford Inn was burned down, along with most of the businesses on the Square, by Union General Andrew Jackson “Whiskey” Smith on Aug. 22, 1864.
For five years, Oxford did not have a hotel at all. To remedy this, Macon Thompson, son of Congressman and Confederate secret agent Jacob Thompson, began construction on the Thompson House in 1869. It was to be a three-story brick building with wide halls on each floor, a reception room, office, bar, gentlemen’s parlor,  large dining room, ladies’ parlor on the second floor, ballroom and chambers for guests – forty rooms in all.
In the 1970s the hotel was condemned by a Lafayette County Grand Jury. However, in 1973 William Holcomb and attorney Grady Tollison bought the building in order to open an office for the law firm of Holcomb, Dunbar, Connell, Merkel and Tollison of Clarksdale, Miss.
Four years later, Grady Tollison purchased the building himself and began the refurbishing process. He converted the third floor into his residence, and hotel numbers may still be seen on the bedroom doors. Tollison placed the name Thompson House back on the building in 1984. He rebuilt the balcony that had been on the front and side of the hotel in the nineteenth century. The building is now the home of the Tollison Law Firm, P.A 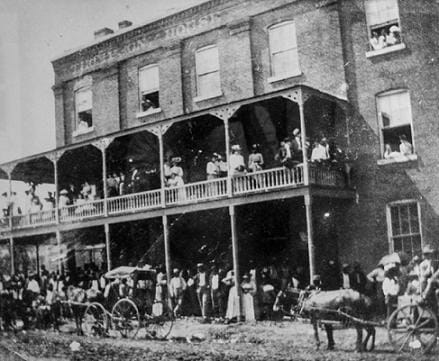 In July 2006, the time-ravaged back half of the Thompson House suffered a short collapse that also affected the Monroe Building behind it. Grady Tollison, his son Gray, and his daughter Rachel Calhoun oversaw the renovation of the Thompson House and the Monroe Building. Both buildings are now combined into a single structure that stands as a testament to the history and longevity of Oxford, Mississippi. 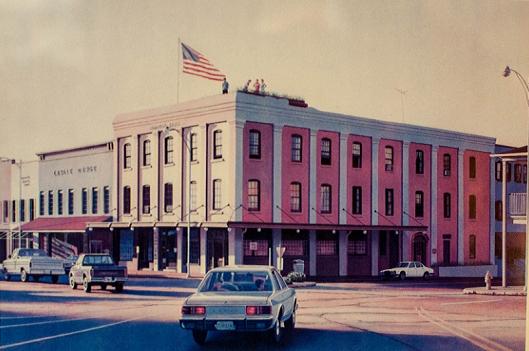