Pursuing a Dream – One Student Who Did All the Right Things

Motivation, inspiration and knowledge – three things university professors and instructors utilize to get their points across to students. On a daily basis, students sit in class and listen to these professionals as they hand out expertise in their chosen fields, stressing what a student has to do to get a job after graduation. Many listen and follow their advice, while others may or may not understand the crucial importance of taking every opportunity and running with it.

One Ole Miss Student who did listen and did all the right things is Laura Marcucci. Marcucci is an Integrated Marketing Communications major and graduates in December. And with the New Year comes a new job that is already waiting for her after graduation.
“Blake Tartt, who owns New Regional Planning in Houston, Texas, a commercial real estate and consulting firm, came to my media sales class and spoke,” Marcucci said. “And while he was talking, I realized that everything he said seemed to be speaking directly to me. It was just incredibly inspirational and he was from Houston, which is where I’m from, and he’s an Ole Miss grad and I liked what he had to say. He had really good advice and he said to always stay curious and that he liked to hire people who wanted more out of the story and strove to get it.”
Marcucci said Tartt, along with Harold Burson, co-founder of Burson-Marsteller, the largest public relations agency in the world today, went on to tell the class about what he called “Windshield Economics,” where he just drove around Oxford or Houston and looked at what was going on in the city and got out in it.
“And I really liked that idea,” Marcucci said. “And then he spoke the next day to Professor Scott Fiene’s class and repeated a variation of the same strategies he’d talked about in my media sales class with Professor Roy Frostenson. And I knew that day, when I heard him again, that I wanted to work for him.”
Marcucci said after that last time she heard him speak, she emailed and texted him and heard back from him via text. 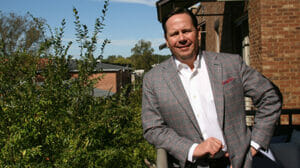 “But I knew if I was really going to get through to a man like Mr. Tartt,” she said, “I needed to do something that really stood out. So I sent him a book called “Damn Good Advice” by George Lois. It’s a book where each page is a piece of advice about marketing and how to make yourself stand out.”
Marcucci said that she’d read the book over the summer and knew that it would be something that Blake Tartt would want to read too.
“So I sent it to him and I asked him if I could meet with him,” she said. “I personalized my request with a handwritten thank you card and asked could we meet over the Thanksgiving holiday since I was going home. And he said yes. I flew home for break and on the Tuesday before Thanksgiving we had a meeting and I interviewed and got the job.”
Marcucci starts the new position on January 5th and said her role with the firm fits in with exactly what she had planned for her professional future.
“Mr. Tartt is a commercial real estate broker and has his own consulting firm,” she said. “And he wants a fresh take on his branding. He wants more social media coverage and to make his websites more contemporary and that will basically be my responsibility. And I am so excited.”
The advice she gives to other undergrads is to utilize opportunities, because she missed many in the beginning of her academic journey.
“For me personally, the fear of being rejected or thinking that there’s no use in trying, because someone else already made that important impression – that paralyzed me. And maybe like me, they just didn’t or don’t go after what they want. And I had to work through that fear so that I could approach someone as successful as Blake Tartt and ask for a job. Self-doubt is powerful, but you have to work through it.” 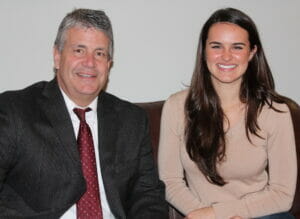 Scott Fiene is an assistant professor and the director of the undergraduate Integrated Marketing Communications program at the university and one of Marcucci’s instructors. Fiene said what happened with Marcucci was what it was all about and why the IMC program worked.
“This is how it’s supposed to work,” Fiene said. “We have successful alums that come back and engage with our program and speak with students. Then in Laura’s case, she reached out to Blake and the circle is completed. My goal is as the IMC program grows, we see more and more of this happening. But students need to be proactive in their own futures, just as Laura did.”
Will Norton, Jr. is dean of the Meek School of Journalism and New Media. Norton said Marcucci did all the right things.
“The hiring of Laura Marcucci by Blake Tartt shows how important it is to bring outside speakers into the Meek School. Mr. Tartt has been to our school several times; he’s had a chance to interview students and get acquainted with them,” Norton said. “And Laura knew how to make the most of the opportunity. She went up to Mr. Tartt after he spoke to her class, obtained contact information and then followed up and arranged for an interview. She did all the right things.
“First, Mr. Tartt came to our school, second, Laura knew how to make the most of the opportunity and, third, Laura had been prepared in her classes. The IMC curriculum is one that really prepares people for the business world.”
Blake Tartt couldn’t be happier with his newest associate and applauds her go-after-it mentality.
“I was so impressed with the note she wrote me when she sent me the book Damn Good Advice,” Tartt said. “She took what I tried to tell all the students in those classes I spoke to and she actually used it.”
The handwritten note pointed out how the book mirrored Tartt’s speeches to her class and kept her striving to work harder for the things she wanted in life.
“In her note she wrote: ‘knowledge is power, as you say, and this book is full of it. It reminds me of your speech from class.’ Now, how awesome is that?”
Tartt was totally blown away by the way she approached he and Burson after they spoke to her class.
“She came up and introduced herself and spoke to both of us,” Tartt said, “and talked about being from Houston. So I did remember her.”
Tartt said he hoped that other alumni would see what a wonderful well of potentiality Ole Miss is for future employees.
“I hope that other alumni will learn that Ole Miss has a talent-rich environment for employees,” Tartt said. “This is why the connection between Ole Miss Alumni and students is so very important. And alumni, we love our school, it’s holy ground. We want to come and give back to the school, because the greatest thing we have to give back to the university isn’t our money, it’s our time. Time is more valuable than money, because when you can give it to the students, they learn so much.”
Angela Rogalski is a HottyToddy.com staff reporter and can be reached at angela.rogalski@hottytoddy.com.