December 23, 2014
1
1381
Some Christmas presents don’t come clad in shiny paper and big bows, but in the form of new family members and the tons of new memories that will soon follow.

Bill and Sharon Taylor married in 2012, merging Bill and his son Joseph with Sharon and her daughter Mary Margaret Vinson. The couple was in the process of applying for a license to foster children when a wonderful surprise fell into their laps. Brothers Garrett, 18, and Jaden, 9, came to visit the Taylors May 23 and have stayed ever since.
“They’re just amazing. They clicked really well with Mary Margaret and it’s worked out great,” Sharon said. “It just adds to our family. We still keep in touch with their great uncle. We look at it as our family just grew by a whole bunch.
“It was amazing how it all came together. It’s hard to explain, but it was just perfect.”
On Dec. 10, Bill and Sharon officially adopted the two boys after their grandmother and caretaker Regina passed away about a year ago. Garrett, as a legal adult, had to consent to his own adoption.
“The judge questioned him more than anybody,” Bill, an officer at FNB Oxford Bank, said.
The new family took a trip to Disney World in November that had been in the works for about a year, and all the children bought new ornaments on the trip and found another on Black Friday to surprise their parents.

“When we put the tree up, us four put it up because Bill was at work, and Mary Margaret, Garrett and Jaden surprised me with a new ornament for our family,” Sharon said. “Each of them also picked out new ornaments at Disney World — she’s Mary Poppins, Jaden is a firefighter and Garrett is a baseball player.”
Before marrying Sharon, Bill adopted Joseph, who passed away. While he is gone, his memories live on and Sharon said she considers herself in a family of six.
“It’s like we’ve always been together in a sense,” Sharon said. “They didn’t know Joseph, but we’ve told them about him.” 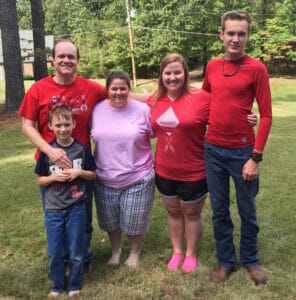 Mary Margaret is working her way through nursing school at Delta State but has bonded with her “shiny new brothers” since May. Garrett and Jaden are new to Oxford School District this year, one at the high school and the other at Della Davidson, and the transition is going smoothly for the boys.
“They seemed really caring, and I feel like they can take care of us very well,” Garrett said of his new parents.
Garrett and Jaden both refer to Bill and Sharon as simply mom and dad, and the familial spirit has already invaded the new Taylor family.
“It’s definitely one of those things where I think God brought us all together,” Sharon said. “It worked out perfectly, and the guys are just awesome.”
Amelia Camurati is editor-in-chief of HottyToddy.com and can be reached at amelia.camurati@hottytoddy.com.
Facebook
Twitter
Pinterest
Previous articleFrom Our Rebel Readers: Top 11 Christmas Movies of All Time
Next articleBeds4Kids Brings Holiday Joy to Oxonian Children