The Mississippi Beta chapter of Pi Beta Phi is teaming up with Beta Upsilon Chi for their annual StarBYX at the sorority house on Rebel Drive tonight.

StarBYX is a play on the pronunciation of Beta Upsilon Chi’s abbreviation: BYX, pronounced as “bux.” As the name promises the attendees can enjoy coffee, live acoustic music and two baked goods for $5. The fundraiser’s proceeds go to Oxford Medical Ministries and Read > Lead > Achieve. 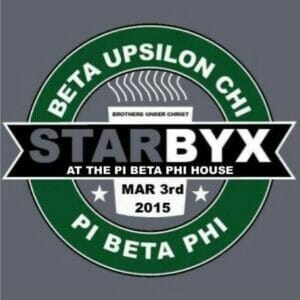 StarBYX is the fraternity’s largest fundraising event every year.

Chuck Rainey, a BYX brother, said, “We have done several philanthropy events in our relatively short lifespan, but when we brought StarBYX, a fairly popular event among BYX chapters, to Ole Miss in 2013, we knew we had a success in the making. The ladies of Pi Beta Phi have played a vital role in the event since its first run, and the contributions they’ve made to tonight’s event far eclipse what we could do by ourselves.

Pi Beta Phi’s contribution to the event is noticeable. Last year the sorority won the Greek Award for Best Philanthropy Event for the StarBYX. This year it will be at Pi Beta Phi house which is a change from past two years. The StarBYX event was previously held at Alpha Omega Christian Student Center.

Emily Reynolds, Pi Beta Phi’s vice president of philanthropy, says, “In addition to the live musical entertainment we will also be selling our StarBYX t shirts and have a cookie decorating competition on Instagram. Pi Phi and BYX are incredibly excited for the event tonight!”

Last year the StarBYX charity raised nearly $3,000. This event might see a large turnout due to cold weather and the promise of coffee, pastries and live music within a large cozy house.

Callie Daniels is a staff writer at HottyToddy.com. She can be reached at callie.daniels@hottytoddy.com.