May 11, 2015
0
330
Small-town Oxford is known for award-winning restaurants, amazing culture and the University of Mississippi, and these amazing qualities bring people to town looking to hone their artistic abilities.

Deep South Daily reporter Brian Powers honors the legacies of amazing authors who have called and still do call Oxford home, a beautiful town that oozes inspiration to all types of artists. Powers writes:

“Oxford lends itself to being accepting of writers due to its rich history of literature and a less than conservative attitude which sets the town apart from the rest of the surrounding area. Ole Miss has a lot to do with that despite the stigma that the school has developed in the past and now seeks to change.” 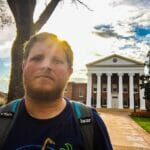 A former musician who decided to pursue his love of writing, Brian Powers is in his senior year at The University of Mississippi after returning as a major in Political Science and English. He is a co-host of Deep South Weekly, a political podcast on southern culture. Follow him on Twitter @Powerscentral.