Vote for Oxford as a Best Town 2015 in Outside Online

The Outside Online, an online publication on travel, is having a fifth annual selection of Best Town in America among 64 locations.

The first five voting rounds began a week ago, with one vote per round per match-ups divided in locations: West, East, Midwest and the South. Oxford made it past the first round with a triumph over Alpine, Texas with 51.38 percent of the votes.

The second round of voting began this past Saturday and will go on until Wednesday. Oxford is up against Athens, Georgia. As of this morning at 10:55 a.m. Athens is ahead of Oxford with 2,589 votes over Oxford’s 1,098 votes.

Here is a graphic of the voting competition of America’s Best Town. The winner will be declared on June 5. 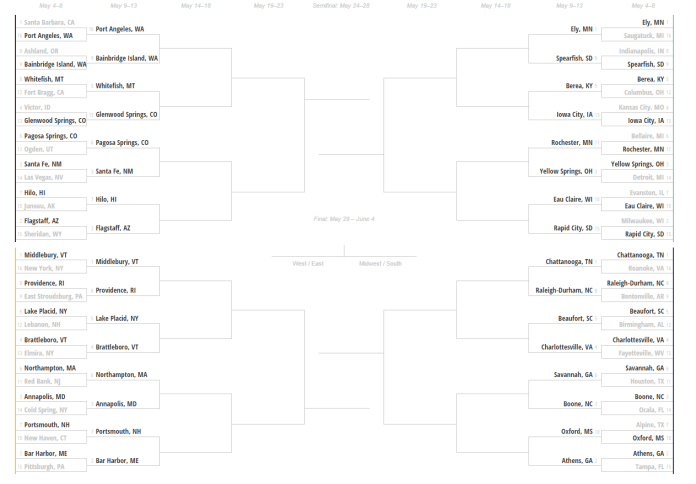 Keep Athens ahead of Oxford MS as Best Town Ever voting! | Outside Mag Online – http://t.co/Kv1pZASN3W

If y’all want to see Oxford win, let’s get a leg up on Athens, Georgia! If Oxford wins it will compete against the winner between the Savanna, Georgia and Boone, North Carolina match next week.

Callie Daniels is a staff writer/reporter for HottyToddy.com. She can be reached at callie.daniels@hottytoddy.com.