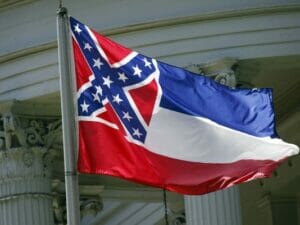 OXFORD, Miss. – University of Mississippi Police Department officers lowered and furled the state flag in a Lyceum Circle ceremony as the campus opened Monday morning. The flag will be preserved in the University Archives along with resolutions from students, faculty and staff calling for its removal.

The university’s removal of the flag is the latest development in discussions within the state about whether to change the official state flag, which includes the Confederate battle flag in one corner.

Interim Chancellor Morris Stocks first joined other state and university leaders calling for a change in the state flag in a statement last June.

“The University of Mississippi community came to the realization years ago that the Confederate battle flag did not represent many of our core values, such as civility and respect for others,” Stocks said. “Since that time, we have become a stronger and better university. We join other leaders in our state who are calling for a change in the state flag.”

In recent weeks the focus of campus discussions has shifted from whether the state should change the flag to whether it should fly on campus. After news spread that the Associated Student Body Senate would take up a measure to endorse removing the flag, more than 200 people attended an Oct. 16 campus rally in support of the idea.

On Oct. 20, the student senate voted 33-15-1 to request that the university remove the flag, following three hours of respectful and impassioned debate. Within the next two days, the Faculty Senate, the Graduate Student Council and the Staff Council joined the student government in asking for the flag to come down.

Stocks lauded the way students, faculty and staff treated one another in the course of debating resolutions encouraging removal of the flag.

“Their respect for each other, despite genuine differences of opinion, was an inspiration to us all,” Stocks said.

Stocks noted that the decision to no longer fly the state flag was not an easy one, adding that the flag means different things to different people.

“As Mississippi’s flagship university, we have a deep love and respect for our state,” Morris said. “Because the flag remains Mississippi’s official banner, this was a hard decision. I understand the flag represents tradition and honor to some. But to others, the flag means that some members of the Ole Miss family are not welcomed or valued. That is why the university faculty, staff and leadership have united behind this student-led initiative.”

Stocks noted that other public universities and local governments have already taken this step, and he continues to encourage state leaders to create a new flag.

“Mississippi and its people are known far and wide for hospitality and a warm and welcoming culture. But our state flag does not communicate those values,” Stocks said. “Our state needs a flag that speaks to who we are. It should represent the wonderful attributes about our state that unite us, not those that still divide us.”