Oxford Stories: My Life as the Rebel Spandex Guy – Making a Mark at Ole Miss

I can still remember the day when I put on the suit for the first time. I was halfway through initiation week for my fraternity. I had just finished a semester at Ole Miss, and I was busy getting ready to go back to school.

I was trying to think of a way to become a part of Ole Miss – to etch my name into the halls of history. Boy, was I not ready for what was going to happen in my life. But, in true Southern fashion, I must tell you another story to tell you this one.

It was a warm summer day, and I was getting ready to go to Oxford for my first Ole Miss football game. It was my first Ole Miss event, even though I went with my family to games earlier in life. But this is the game that comes to mind when I think about Ole Miss. I can still remember the score – 37-34 Vanderbilt.

“Not a good first impression” is one thing that some people would say. But the score is just a little speck of memory whenever it comes to my family. It was such a wonderful moment to bond with my father that day – to finally enjoy something my father enjoyed as equally as I did. Football, and sports in general, are things that bring my family together. It inspires me to do the things I love to do in sports. 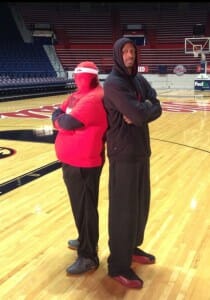 Though not as big as our football rivalry with the Egg Bowl, Ole Miss and Mississippi State have a subpar basketball rivalry. As it is known in the South, football is king. But when it is your in-state rival, things do turn up a notch.

State was coming into the game ranked 15th in the country, and what better way to show the Bulldogs we were ready than to put on a spandex suit?

My inspiration for the spandex suit comes from Sully and Force, the Vancouver Canucks green men. I loved the idea of two guys sitting next to a penalty box and doing whatever they wanted to while one of the opposing players was sitting in a penalty box. I figured if they could do it, why couldn’t I?

To make a long story short, the Rebels went on to win the game 75-68 and thus cemented the legacy of Rebel Spandex Guy.

I can say that I have seen the worst in this suit – losses, the criticism of a big guy like me wearing Spandex, and people complaining about my passion as a fan.

And five to 10 years from now, I’m sure Rebel Spandex Guy will be an afterthought on campus. But I can say that I have truly etched my name into the halls of history – a history that looks bright and stretchy (pun intended).

Article by James Lott as seen on OxfordStories.net.