Dr. Julie Ann Wronski teaches American Politics at Ole Miss and is conducting a survey to better understand how people feel about the 2016 election.

Please take the time to complete the survey at the end of this interview. Julie’s research will benefit as will Ole Miss. HottyToddy.com spoke with this outgoing teacher recently in a “Back to School” sort of forum.

HottyToddy.com: Professor, your survey caught our attention. What’s the motivation?

Julie Wronski: The end result will be part of an academic publication. The questions vary (all responders are anonymous) and probe such areas as what is motivating the Trump support.

HottyToddy.com: Before we get into your position at Ole Miss and American politics, we understand you have quite an impressive résumé.

Julie Wronski: I grew up in Glendale, California (outside of Los Angeles) and attended Catholic schools my entire life. I received my undergrad from Georgetown majoring in Government and Psychology.

HottyToddy.com: Your academic life apparently was then slightly interrupted for the private sector.

Julie Wronski: That’s correct. I was hired by a nonprofit “American Institutes for Research” where I created K-12 standardized tests primarily for the state of Ohio. While there I was also obtaining my Masters from George Washington University in Political Psychology.

HottyToddy.com: My goodness, you never stop learning! What happened next?

Julie Wronski: I pursued my PHD in Political Science from Stony Brook University on Long Island. My concentrations were Political Psychology and American Politics.

HottyToddy.com: Your résumé keeps getting more impressive. We can clearly understand why you were such a catch for Ole Miss.

Julie Wronski: Following this part of my education I moved back to DC where I held a post doctorate fellowship at George Washington then moving to Oxford in 2015.

HottyToddy.com: It took you a while to get here, but what a journey. 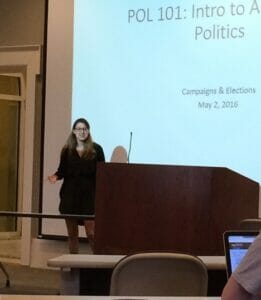 HottyToddy.com: Let’s talk one of our favorite subjects…politics. What has been your biggest surprise thus far in the campaign of 2016?

Julie Wronski: All conventional wisdom has been tossed out the window. What the pundits have predicted…the exact opposite has resulted.

HottyToddy.com: As part of your fact finding and research gathering, we understand that you attended a Trump rally in Madison earlier in the spring.

Julie Wronski: I did. He is a phenomenal salesman. He makes a pitch that appeals to the inner emotions of his followers.

HottyToddy.com: What is going on presently in our country that is driving the 2016 electorate?

Julie Wronski: The economy and national security are heading the list.

HottyToddy.com: The “feel the Bern” movement is being motivated how?

Julie Wronski: We haven’t seen such liberal ideology in over 40 years since McGovern. The youthful voters are responding to free college and student loan forgiveness policies. This is a form of progressive populism that is more economically than racially motivated.

HottyToddy.com: Let’s have a lightning round. I’m going to throw some names out at you and give us your initial reaction. Here we go….

Julie Wronski:
(Ted Cruz) Why Carly Fiorina?
(Jeb Bush) Please clap.
(Debbie W. Schultz) Aligned with Hillary.
(Dr. Ben Carson) Should have kept to neurosurgery.
(Reince Priebus) Why did you let DJT file as a Republican if you don’t believe he is one?
(Bernie Sanders) Progressive ideology.
(Sarah Palin) Reality TV star.
(John Kasich) A darkhorse.
(Hillary Clinton) Motivated, driven to become President.
And last but not least, (Donald J. Trump) He never thought he would get this far.

HottyToddy.com: Before we run out of ink, your impressions of Oxford and Ole Miss.

Julie Wronski: It is a small town, which is a bit of a culture shock to me. It’s a beautiful quaint community which I did not envision to be so liberal. I have come to appreciate the southern culture of etiquette and lifestyle. The thrill of gun ownership and southern pride is powerful.

HottyToddy.com: Wrapping things up, what is mostly on the minds of our students?

Julie Wronski: As most of mine are true freshmen, their social lives, family life, academics and trying to identify a career path are first and foremost. The Greek life is huge here. They are young enough to still figuring out who they are and learning from mistakes.

As you can see, talking politics with this bright, witty, young professor could have been non ending. However, we had to end it here, but will look forward to a post survey discussion. Please consider taking the survey now. We’ll be glad you did.