Rebels fans and students sure were last night at the public unveiling of the North End Zone at Vaught-Hemingway Stadium. 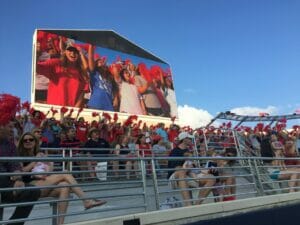 The Associated Student Body (ASB) partnered with the Ole Miss Athletic Department last night to create a pep rally to celebrate the opening of the North End Zone. Coach Freeze, Ross Bjork, the volleyball team and the ASB welcomed fans to the new student section. The North End Zone has 2,000 new seats for students to fill.

“We decided to partner with them and it turned out to be a great event to market to students,” said Austin Powell, ASB president. “ASB already has an atmosphere for family and fun, so we wanted to elevate it this year.”

Cheerleader Lee Williams was introduced as the official “Hype Guy” at the pep rally. He taught the crowd a new chant, and of course, got everyone hyped for the new end zone.

Here’s what you’ve been waiting for…an inside look of the North End Zone with sideline interviews!

Make sure to catch Jac Bedrossian on game day September 10 beginning at 12 noon before the home Wofford game for HottyToddy.com’s new “Pre-Game LIVE in the Grove,” show. This will be a live, 30-minute show, which will feature sights, sounds, personalities, and other great Ole Miss pre-game and tailgate coverage. it will be a regular show before every home game, and each show will be posted for later viewing as well.

Jac Bedrossian is a reporter for HottyToddy.com. She can be reached at jacbtv@aol.com