The Ole Miss football season was delivered a catastrophic blow when the third worst team in the league humiliated the Rebels 38-17 in Nashville. The 10-point favorite Rebs received one of the more embarrassing defeats in the series that dates back to the 1800’s. Hugh Freeze is now 3-2 versus the Commodores.

In other games, most teams strengthened their bowl posturing starting with 11-0 Bama which toyed with Chattanooga 31-3. Florida wrapped up the Eastern Division with a 16-10 road win in Baton Rouge. Tennessee didn’t let the Gator victory distract them as they blew out Missouri 63-27. Also, Arkansas won in Starkville 58-42; Georgia over LA Lafayette 35-21; Texas A&M 23-10 over UTSA; SC over Western Carolina 44-31; Kentucky overcame Austin Peay 49-13, and Auburn coasted past AL A&M 55-0.

The Power Rankings reset with the current standings as follows….. 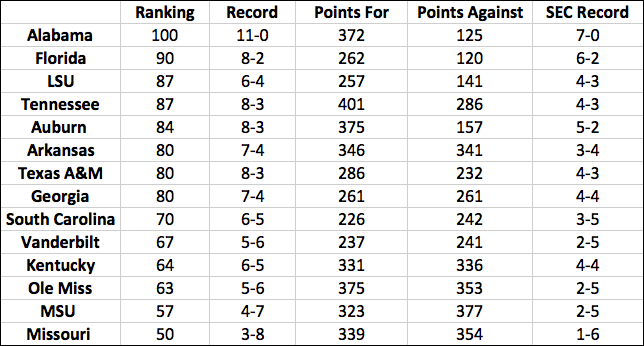 This Thanksgiving week finds the headliner game Auburn at Alabama. The SEC matchups have LSU at Texas A&M; Tennessee at Vanderbilt; Arkansas at Missouri; and Oxford hosting the Egg Bowl. Nonconference contests have SC at Clemson; Florida at FSU; Georgia hosting GA Tech; and Kentucky at Louisville.

Returning to the dismal Rebel season, this year’s Egg Bowl will feature two of three bottom dwellers highlighting two of the three worst defenses in the SEC. A Reb victory could land a minor bowl, possibly the Independence or Birmingham bowls. Injuries have certainly played a key role this year but missed assignments have equally been a disaster, to borrow a line from our 45th POTUS. The one word that brings the season into proper focus, however, is “unacceptable.” Getting blown out by a Vanderbilt team that is 3-19 in their previous 22 league games is just that…unacceptable!