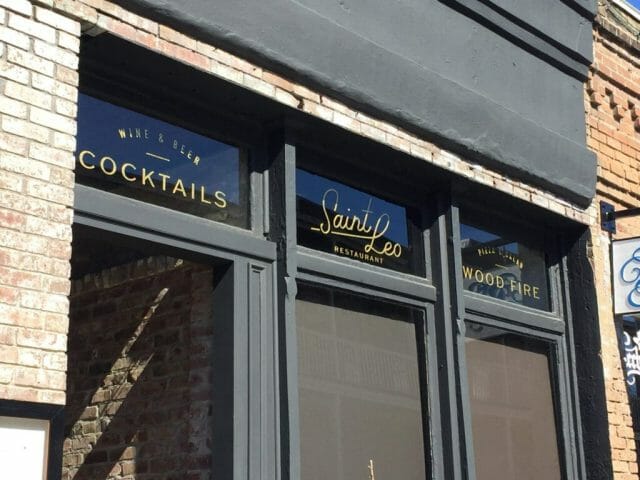 Saint Leo opened its doors on the Oxford Square seven short months ago, and in a town known for its food, the Italian restaurant has quickly become a standout. The restaurant is well on its way to becoming much more than just a local favorite, as it has been nominated for the prestigious James Beard Foundation’s “Best New Restaurant.”

Over 24,000 entries were sent in and reviewed by the committee as they narrowed the list down to 27 semi-finalists. Consisting of over 600 judges, the panel was made up of restaurant critics, culinary educators, as well as past James Beard Foundation Restaurant and Chef Award winners. The list was released earlier today, and owner Emily Blount was at a loss for words when she was told.
“I had zero clue until I got a text this morning that said ‘congratulations’ to which I responded ‘congratulations for what?’ They then sent me the link and..I literally am speechless,” Blount said. “I’ve eaten at amazing places, and known people who are of that caliber, but I would’ve never even thought I would be in there amongst them.”
Awards and nominations weren’t on Blount’s mind when she opened Saint Leo. Working hard to find the right concept, she settled on the idea of a restaurant that treats customers like family. Blount wanted to ensure the food was always consistent, fresh and had customers wanting to come back for more.
“Do I want it to be an award winning restaurant or do I want it to be the best neighborhood, sort of clubhouse, for the people of Oxford? To be honest, I landed on the latter; I want people to love to come here and feel like this is their restaurant, and to have a great experience,” Blount said.  “My intention was not to go down the road of trying to search for awards or accolades, so that is part of the reason I’m shocked, excited and really floored.”
Blount moved to Oxford from New York, and upon her arrival, she knew that she wanted to be a part of the hospitality industry. Having worked in numerous restaurants throughout her career, Blount wanted to take the next step, which led to the opening of Saint Leo. She praised the Oxford community for their role in driving the restaurant’s success.
“The Oxford community has been so supportive, kind and patient, even as we’ve gone through growing pains. This whole world is very moment-to-moment in that you either like what’s put in front of you or you don’t; it’s the same way with food, and people’s immediate response has been genuinely unbelievable,” she said. “This community has a way of surrounding its people and lifting them up, and to be on the receiving end of that has been amazing.”
The finalists will be announced on March 15, and the winners will be announced on April 15 at Pier Sixty at Chelsea Piers in New York City.
For more information about the James Beard Foundation and a complete list of the Semi-Finalists, click here.