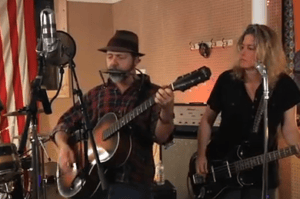 Blue Mountain announced in February that they are again calling it quits, but not before they sling a handful of farewell performances. Oxford can soak up the last notes from the group in three opportunities this week. Blue Mountain founders Cary Hudson and Laurie Stirratt will do some acoustic songs Friday at a special outdoor Thacker Mountain Radio show on the Oxford Square at 6 p.m. Then, the band plays at the Double Decker Arts Festival Presented by C Spire at 8 p.m. Friday and gives it one last go at Proud Larrys’ on Saturday night after the Double Decker music ends, around 10 p.m.

Here’s video of Blue Mountain performing “Midnight in Mississippi” in a filming of Oxford Sounds, a 10-part video series featuring groups performing original works and talking about their music and what Oxford means to their art.

Oxford Sounds is a project of the Meek School of Journalism and New Media that draws upon the talent of students and professionals in the Oxford area to discover and document the music of the Oxford area. This last year, the project has captured 19 musicians, songwriters, and groups that are from Oxford or are a part of the Oxford musical scene.

Oxford is home not only to great musicians and musical venues, but many are unaware of the very vibrant music recording industry that exists in Oxford. These studios opened their doors to Oxford Sounds, which will give its audience a look inside studios such as Tweed Recording, Sweet Tea, Fat Possum and Black Wings.

Oxford Sounds is made possible by grants from the Oxford Tourism and Convention Bureau, the Yoknapatawpha Arts Council, and the Ed and Becky Meek Foundation.

Facebook
Twitter
Pinterest
Previous article
You Don’t Have To Be an IT Nerd to Make An App
Next article
Double Decker 2013 to Rock On, Rain or Shine