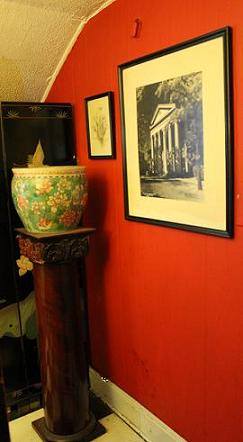 You have to be ‘old’ Oxford –– from the 70′s and 80′s, and probably a drinker –– to have any clue at all as to what this photo is about.
Frank Odom and Ron Campbell will probably know. I’m not calling them drinkers by any stretch. They are/were Warehouse guys. The Country Village Mall burned on the night of Feb. 15, 1986. For all the business owners there, it was heartbreaking. Still is.
In the Warehouse bar there was a long ‘bureau’ (my word) across the wall, behind the bar, where the bottles were. It was a huge piece of furniture. Twelve feet long, maybe, with a mirror running the length of it and two large columns on either end that held up the top section of ornate carved woodwork that crowned the piece. Patricia Young told me that the info she had on the piece said that it came to the United States from England in 1901.The night of the fire, the OFD punched a hole in the roof of the Warehouse. The hole was right above the small passageway that went from the inside bar to the outside bar. They poured water through the hole. But still all was lost…except this column that they were continuously spraying down. In this photo you can’t see the two-inch-wide black, burned, strip down the back side.
Through the months after the fire, Mom still wanted to go back to see if she might find just one more thing worth saving. We wouldn’t let her go alone. One afternoon while she was still looking for something, I was wandering around just looking. I’d been in the burned out Warehouse a dozen times since the fire but somehow had never noticed the little-damaged column.
I had stepped out on the patio and was smoking a cigarette and glanced over and saw it. I got a hold of it and realized that I could easily move it. It had never been attached but rather was held in place by the weight of the top crown of the piece.
About the time I was working it out from under the top part, Martha Glenn walked in. She asked what in the world I was doing, and I told her I was taking this home with me. The column was still holding up the big top section.
When I slid it to the edge, Mom said, “John, you can’t do that!”
“Momma, yes I can,” I said, “and you better get back, now!”
She backed up all the way to the dining room. I yanked it the rest of the way out and went straight back through the opening to the outside bar, column in my arms. I almost fell down. Then there was the damndest crash of glass and wood you ever heard!
I’ve had the old column with me ever since. And here it stands in the corner of my office. Several people have offered some good money for it, but it’s here for life.