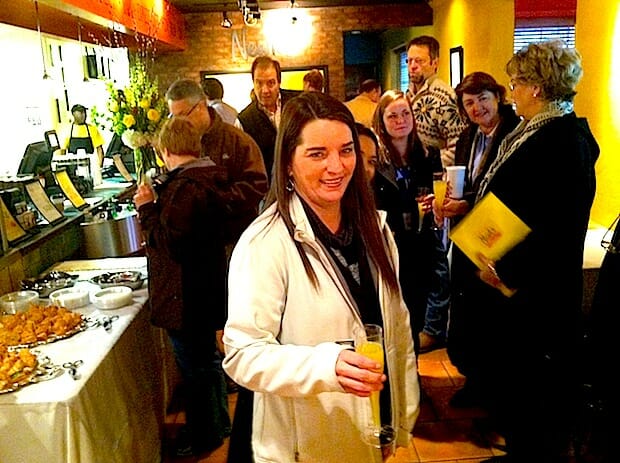 On hand at the original balloon-decorated, freshly painted University Ave. location were the company’s founders, key vendors, staff and Oxford fans who have supported the growing fast-casual eatery since its initial opening February 4, 2004.
Founders Chris Newcomb, Dr. Don Newcomb and Debra Bryson made brief remarks thanking attendees for their contributions and hard work over the years.

“Our goal at the beginning was to offer the public a new, upscale fast casual restaurant that would feature a stylish setting, an ever-evolving menu and great, fun customer service that would offer a fantastic experience to each customer,” said Bryson, who began her long association with Dr. Newcomb as an office manager for his dental practice.

Dr. Newcomb admitted that luck had a great deal to do with the company’s success, adding, “My first stroke of good luck was actually getting into dentistry school after graduating from Ole Miss. But I was also lucky in surrounding myself with visionary, talented people like my partners and the vendors and staff who turned this dream into reality.”
The event featured refreshments, Newk’s signature food and a slide show portraying the journey to today’s celebration.
Newk’s currently has 66 restaurants in 13 states with 200 total locations anticipated by 2019. The company is ranked 42nd among a leading trade publication’s Top 150 fast-casual chains.
At the end of his remarks, Dr. Newcomb offered a personal tribute to Oxford, the founding site of Newk’s. “I can’t imagine anyplace except Oxford and University Avenue where this great dream could have taken flight,” he said. A few years after dental school, Newcomb sought a town in which to set up his private practice. In choosing between Columbia, Mississippi and Oxford, he says he heard a voice telling him Oxford would become “the center of the universe.” So, he moved to Oxford in 1972, and now observes, “it has.”