Charles Overby was the featured speaker in the 8th annual Lenten luncheon Series sponsored by 19 Lafayette County churches.
The event was held this month at the Oxford-University United Methodist Church.
Overby is chairman of the Overby Center for Southern Journalism and Politics at Ole Miss and a former executive with the Gannet publishing group. He is an Ole Miss graduate and former editor of the Daily Mississippian. 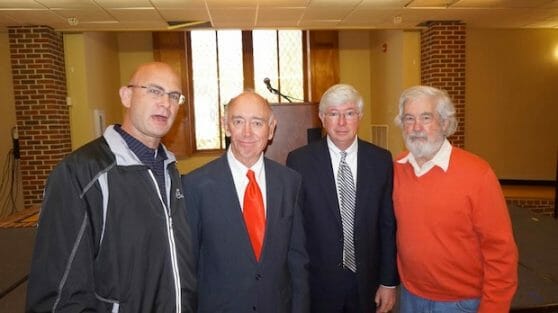 In addition to Overby, second from left, on hand for the luncheon were Lance Reed (left), owner of Oxford’s Chick-fl-A; OUUM Pastor Warren Black (second from right); and Curtis Wilkie (right), former White House journalist for the Boston Globe and currently a member of the faculty at the Meek School of Journalism and New Media at Ole Miss.
The event supports the Interfaith Compassion Ministries, a group supported by churches, which helps those in need in the community Soup for the informal even was provided by Oby’s.
According to information supplied at the event, The Interfaith Compassion Ministries serves community needs in crisis situations and helps many homeless people each year.
Overby was introduced by Dr. Robert Khayat, former chancellor of the University of Mississippi. The Oxford Civiv Chorus performed at the event.
HottyToddy.com staff report