Scouts across the Delta Area are invited to attend a celebration and remembrance of Tallahatchie County’s Boy Scout Camp – Camp Tallaha on Thursday May 1 at 6:00 p.m. at the Charleston C.A.R.E. facility located on the Square. 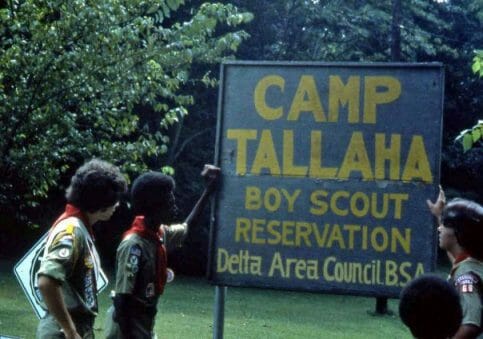 The camp closed in 2003 but had served the Delta Area Council Boy Scouts since the summer of 1926. Before that time, the property had been used as a church retreat and campground. Plenty of memories are scattered about the 165-acres of rolling hills, ice-cold spring fed pool and various tree named campsites.

Glenna Callender, Executive Director of the non-profit organization, Charleston Arts & Revitalization Effort (C.A.R.E.), is putting the program together and has gathered several speakers for the evening.
“This is strictly about Camp Tallaha,” Callender said. “About two to three times a year we have a history program because Charleston has a lot of good rich history. And we try to save it and present it because the young kids don’t know it.”
The camp closed in 2003 and was later sold by the Chickasaw Council of the Boy Scouts. The Memphis based council had absorbed the Delta Area Council a few years before that. The camp was bought for its timber and an attempt was made to create a high-end hunting camp. Most of the buildings and campsites now lie in ruin and decay but the memories and friendships forged in the Tallahatchie County hills remain strong and ever present.
The 6 p.m. program to be held at the C.A.R.E building on the Charleston Square will feature speakers from all aspects of the camp. Pulled pork barbecue plates will be sold for $8.00 each, with proceeds going towards building a Camp Tallaha Museum for Charleston.
“We ask that anyone who has any photos or memorabilia of Camp Tallaha that we may use for the program to please bring them to the Charleston Arts Center by April 30th at noon.” Callender said.
“We will start with Bobby Dailey of Charleston , and he is a Silver Beaver (highest rank a Boy Scout leader can attain). He was the youngest member of the Rotary Club when they decided to buy the land from the Fox family to build Tallaha,” she said.
Also on tap to speak at the event will be Jim Moorman, a longtime Scoutmaster and Tallaha camper who has helped contribute history to the Facebook page set up to preserve Camp Tallaha history. The site, https://www.facebook.com/groups/camptallaha, is a group page where anyone with a tie to the camp can post pictures and relive memories.
A unique view of the camp will be presented by Megan Little Cox who literally grew up on the campground. Her father, Donnie, was the Camp Ranger for many years. In addition, former scout and Tallaha staff member, Michael Lowery.
Everyone is invited to attend the event. Callender said C.A.R.E hopes to build a permanent museum to memorialize the camp for those who hold it so dear in their lives.