Will 1969 Repeat Itself This Year With Football Glory?

Commentary by Steve Vassallo
I was prompted to write this piece because 45 years ago was the last “complete” summer that I was able to spend in God’s greatest place on earth …. Oxford, Mississippi until now.
I am one who believes history truly repeats itself and little did I realize in July, 1969 (while studying for my real estate license) that in the fall we would experience one of the most interesting seasons in Ole Miss football history. 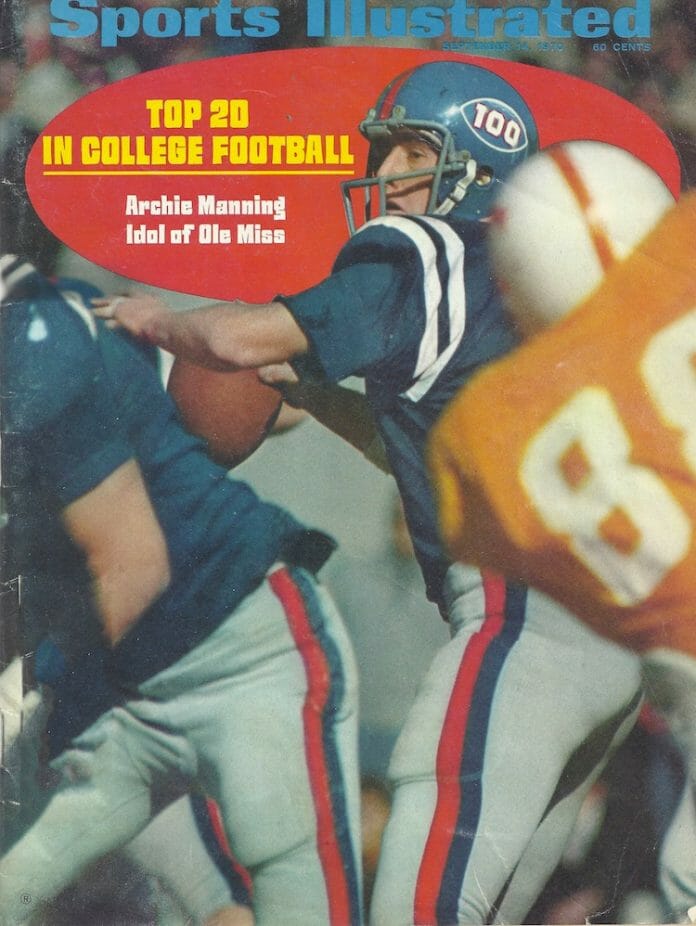 Before we jump off into the fall sport , I would first like to offer a brief description of how very different Oxford was in that era. School started much later then. Those few of us who arrived in Oxford from Nashville actually witnessed cotton truly  “blowing in the wind” on the square. Two gins were close by and the cotton trailers dominated the traffic on the square. It was electric being  here. No bars graced the square. A furniture store, several pharmacies, Nielsens plus a  couple of banks were the footprint. Trailways was the next door neighbor to where BottleTree Bakery is today while The Ritz (the one stick) and The Lyric (the two stick) brought us Hollywood’s finest. Jackson was the home of Kiami’s, a drive in movie theatre and little else. Football was king as Archie was returning for what would be his finest hour.
Ole Miss was the favorite to “win the conference” as in those days two divisions did not exist. Before we could even get off to a running start, we were behind the eight ball. Three losses to Kentucky, Houston and Bama (33-32)  almost made the November confrontation with Tennessee in Jackson a secondary issue. The Vols were ranked third in the nation, a solid 17-point favorite and a lock for the Orange Bowl. In all likelihood we would limp into the Liberty Bowl with 4 losses and end the 1969 season on a less than momentous note.  However, Archie Manning would not accept this fate!


Of all the Ole Miss football games I have ever attended, the 1969 game with Tennessee will  always stand out as “extra special.” We not only won the game by a commanding score of 38-0 (Tennessee’s worst defeat in the 20th century), we would accept a Sugar Bowl bid where we would defeat Arkansas. On the other hand the Orange-bowl-bound Vols would have to settle for the Gator Bowl where they would end the season with a loss to Florida.  We ended the season with a top-ten AP ranking despite the three losses. It was a great time to be a Rebel!
For some strange reason I believe the 2014 season will in many ways mirror that fall of 45 years ago. Tennessee is back on the schedule. This time we’re hosting them here in Oxford opposed to Jackson. Memphis, Alabama, LSU, Vanderbilt and State are also back and this time Arkansas shows up during the regular season. It’s been January 1, 1970 since the Rebels appeared in the Sugar Bowl. Those of us who witnessed Archie accept the MVP on that freezing afternoon will never forget it.
History does repeat itself. In the event it does, all Rebel fans should dial in their GPS to find the quickest way to Bourbon Street. We cannot get much closer to observe a  shark attack even if (this time) it will be indoors!

Steve Vassallo is HottyToddy.com’s newest contributor. Steve will be writing on Ole Miss athletics and other subjects. He is an Ole Miss grad and former radio announcer for the basketball team. Currently, Steve is a highly successful leader in the real estate business who lives in Oxford with his wife Rosie.