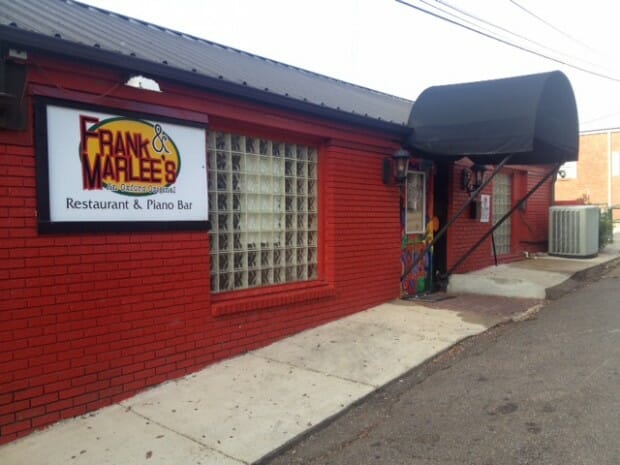 With about two more years remaining on his lease of the building where his business Frank & Marlee’s operates at 1210 Harrison Avenue, Todd Lynch was unaware of plans to tear the building down, he said. The Oxford Eagle reported on June 3 the news that architect Corey Alger presented plans—for Carol Tidwell, owner of the 1210 Harrison Building, and It’s Time Oxford, LLC, owner of adjacent property—on Monday to the Courthouse Square Historic Preservation Commission for a new commercial and residential structure, and the plans were approved. But Lynch and bride Ashley, honeymooning this week in the United Kingdom, told HottyToddy.com Wednesday night that they had not been told of concrete plans to demolish the building.
“We’re not going anywhere,” Lynch said. “We’ve got roots in the community, and we plan to stay in that building.”
Lynch said he only became aware via social media while on his honeymoon of the application for and approval of the demolition. According to Lynch, he contacted Tidwell upon learning of the Eagle report, and she told him she was not aware of the demolition plans. Tidwell could not be reached by phone Thursday morning.
The building housing Frank & Marlee’s has been a popular hangout for decades in Oxford, including previous incarnations as Murff’s and Ireland’s.
HottyToddy.com will provide updates as information is learned in the Frank & Marlee’s demolition.
Editor’s Note: Read updated details here.
— Tad Wilkes, tad.wilkes@hottytoddy.com