This year, SFA commemorates the 50th anniversary of the Civil Rights Act of 1964 and ask questions about inclusion and exclusion in the modern South, taking into account old and new imperatives like ethnicity, sexuality, diet, class, gender, and race.  We’ve invited back Marcie Cohen Ferris, to join the conversation. Marcie is an Associate Professor of American Studies at the University of North Carolina at Chapel Hill. She gave the keynote speech last fall during our annual symposium.

Marcie will give a talk about food and the other in the South, where she will draw from her new book, out this fall, The Edible South: The Power of Food and the Making of an American Region. Southern food, Marcie contends, “is intimately connected to the politics of power. The contradiction between the realities of fulsomeness and deprivation, privilege and poverty, in southern history resonates in the region’s food traditions, both beloved and maligned.” She will pick up where the previous speaker of the weekend, Clay Risen, author of The Bill of the Century leaves off on the idea of the long civil rights movement and how the issues we confront today are still connected to the movement. 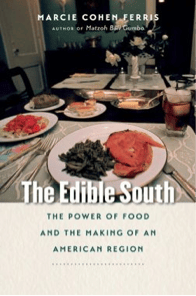