My father started taking me to the woods when I was four years old, and I remember it to this day. We went squirrel hunting. He shot a 12-gage shotgun and I brought along my popgun.

From there, I was introduced to dove hunting and in fact, back in the late 60s, Daddy still quail hunted a few times a year on our old farm east of Shelby here in the Delta and he took me along with his bird dog, J.C.

Duck hunting was also a part of the program and we hunted on the Mississippi River, which was extremely dangerous and very cold.

Then, my hunting completely changed when my friend Mike Nassar and I discovered the great bow hunter, Fred Bear, from watching his weekend TV show back in the 70s.

At that time, the longtime taxidermist in Shelby, Trustin Hicks, was the only bow hunter we knew. Mr. Hicks showed us his bows, how to hold them, and how to shoot. Mike and I were hooked. We spent hours sitting in an old pecan tree outside of Shelby in some small woods hoping to see a deer. We rarely saw one. Then, my father joined the old Po Boy Hunting Club that is now Concordia Hunting Club, which is located next to Gunnison in western Bolivar County on the Mississippi River. Mike and I felt as if we had landed in a zoo because there were so many animals.

When I went to college, my hunting in general slowed down because back then at Ole Miss, we were hunting for other things! Then, it slowed down even more when I moved to Jackson after graduation and started my career. But, after a 14-year break, I returned to the woods when Cindy and I moved back to the Delta in the early 90s.

I started taking our sons to the woods when they were four years old and they loved it from the first day. Unlike so many other fathers, I did not have to worry about my boys being able to sit on a deer stand for hours. They never wanted to leave.

My friend from Cleveland, Ted Alford, came by my office one day when he and I were serving on the board together of Donaldson Point Hunting Club and he said, “Here, put this in the newsletter.” It was a quote he had found … “If you take a boy hunting, down the road you won’t have to hunt for the boy.” Cindy and I found this statement to be true.

So, here we are at the beginning of a new hunting season and our family could not be more excited. As one of the Commissioners of the Mississippi Department of Wildlife, Fisheries, and Parks, I would like to point out that some of the rules and regulations for this year’s hunting season have changed. In order to see these changes, visit www.mdwfp.com. 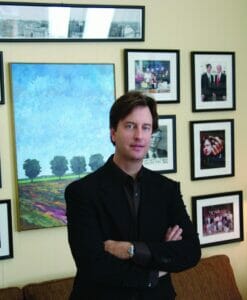 Scott Coopwood, a seventh generation Deltan, lives in Cleveland, Mississippi, with his wife Cindy and their three children. Scott is the publisher and owner of Delta Magazine, one of the South’s leading lifestyle publications, the Delta Business Journal, the first business publication in the Mississippi Delta, and Cleveland’s weekly newspaper, The Cleveland Current.