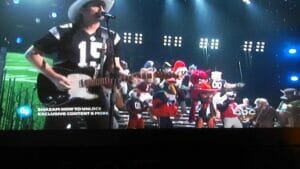 The Ole Miss Rebels are also mentioned in Paisley’s song:

Emily Newton is a staff reporter for hottytoddy.com and Magazine Editor of Experience Oxford. She is a recent graduate from the Meek School of Journalism and New Media School of Ole MIss. She can be reached at emily.newton@hottytoddy.com. Go Rebs!