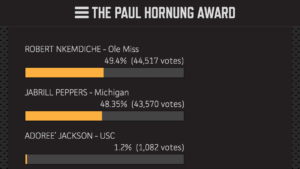 The race to first place has been neck-to-neck between Nkemdiche and Michigan player, Jabrill Peppers. Michigan fans are just as determined as Rebel fans to vote their player into first place.

Hottytoddy.com caught up Nkemdiche’s father, Sunday Nkemdiche  to talk about the Paul Hornung award and what it would mean for Robert to win.

“I’m very, very excited,” Mr. Nkemdiche said about the possibility of his son winning the award. “To me, it would mean a lot and to the legacy of Mississippi. It would be tremendous.”

Robert has had an incredible season with the Ole Miss Rebels, and his father agrees that Robert had a remarkable game last Saturday against the Mississippi State Bulldogs.

“You can say that again,” Mr. Nkemdiche said as he chuckled in reference to how great his son played in the Egg Bowl. “He has put a lot of hard work and effort into it. He loves football.”

Mr. Nkemdiche said he encourages his friends and family to continue to vote and support Robert by voting everyday for the Paul Hornung award.

“I talk to my friends, family members and say this is one of our sons and he has put in hard work into this,” Mr. Nkemdiche said.

The fans’ vote will count as the 17th vote alongside 16 sports journalists and former NFL stars in the national selection committee deciding on the Paul Hornung Award winner. Nkemdiche is one of the four finalists for this award.

On Tuesday, November 24, Jabrill Peppers of Michigan is in first place with 6,339 votes. Robert Nkemdiche comes in second place with 3,673 votes. Christian McCaffrey of Stanford has 656 votes and Adoree Jackson of USC has 604 votes.

The winner will be announced on Friday, December 11.

Callie Daniels is the senior managing editor at HottyToddy.com. She can be reached at callie.daniels@hottytoddy.com.

Updated by Emily Newton. Emily is a writer for HottyToddy.com and editor of Experience Oxford magazine. She can be reached at emily.newton@hottytoddy.com. Cover photo by Josh McCoy/Ole Miss Athletics