Ole Miss alumni, Ben and Erin Napier, are hosting a pilot television show for HGTV on Sunday, Jan. 24, at 11:00 a.m. CST. The show is called “Home Town” and is based in Laurel, Mississippi.

“Home Town” features the dynamic couple renovating houses in Laurel’s historic down-town region. Ben, a master at wood work, and Erin, a print designer, have put their talents together to renovate homes for families.

After getting married and renovating their own house, Southern Weddings magazine reached out to Ben and Erin about featuring the couple’s home in an article.

“We had renovated our house, studio and a home downtown. They (Southern Weddings) posted pictures of our house on Instagram and we got a ton of new followers as result. A couple of months later we got an email from Lindsey, Executive of Original Programming with HGTV,” Erin said. “She said, ‘I’m in love with your town, business and love story. Have you ever thought about TV?’”

From then on, Ben and Erin began the process of filming the pilot episode for “Home Town” in Laurel. In the show, Ben and Erin take a couple that is interested in moving closer to the historic region of Laurel and show them potential houses to renovate.

“There’s a big group of young families doing what it takes to restore these old houses,” Ben and Erin said.

The family whom Ben and Erin show potential homes to already live in Laurel or are moving to the city. Erin’s mother is a realtor and helped find homes for Ben and Erin to show to the couple.

“We bring a team of local craftsmen and architects,” Erin said. “We introduce them (the couple) to the community and we put lot of Laural’s history into the home.” Adding to Erin’s words, Ben said, “Erin’s design style- she wanted it to feel like they’re already at home, and I built four pieces of furniture like as a house warming gift.”

The couple has enlisted the help of two more Rebels and their spouses, Mallorie Rasberry and Josh Nowell, who also live in Laurel. Mallorie was Erin’s roommate at Ole Miss and Josh was Ben’s roommate. Mallorie lives with her husband, Jim, in Laurel as does Josh and his wife, Emily.

“You don’t have to be an expert to save your home town,” Erin said. “Mallerie is an accountant (Ole Miss degree), credited as an associate designer.”

Erin and Mallorie are best friends, which has to make the show even sweeter! Josh and Jim help Ben out, too, by helping him retrieve the wood he uses to build furniture.

“That’s another point of the show, your support system is here,” Erin said.

Apart from having a group of Rebels- and their spouses- helping the couple on the show, Ben and Erin said they still have connections back in Oxford and Ole Miss. In fact, that is where part of their journey takes place.

Ben and Erin graduated from Ole Miss in 2007; Erin with a bachelor’s of fine arts degree with an emphasis in print design and Ben with a bachelor’s degree in history. The couple met in college at Jones County Junior College, and according to Ben’s bio, he told Erin he loved her six days after they met (awe!).

Upon transferring to Ole Miss, the couple maintained their love story at the university.

“It all started in the art department,” Erin said about continuing their story and the business they would one day build.

“The art classes at Ole miss are 3 hours – so weekly classes are 6 hours. I was in history and would be finished early,” Ben said. “I would go and hang out over there (in the art building). The sculpture department has a wood shop. That was my first experience with wood working. Sometimes they would let me work on things.”

According to Ben, he learned a lot from mentors and instructors in the wood shop at Ole Miss. Ben said he still reaches out to people at Ole Miss on a weekly basis. However, Ben said he loves history, which comes in handy with his degree and their show.

“The big part of the show is the history of Laurel,” Ben said. “My degree in history lit a fire in me to learn more.”

Erin also keeps part of her alma mater close as she travels back to Oxford to speak to the art department each year.

“We come up every spring and I speak to the art department,” Erin said. “That’s always the good part of spring!” 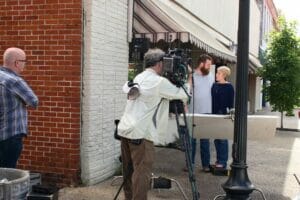 While filming the show in May and June of 2015, the Mississippi weather showed out for some of the film crew, who had never been to the hospitality state, and created some interesting jobs.

“Like most men, I sweat like crazy and on real estate day, I had to look nice,” Ben said. “It was so hot, one of our production coordinator’s jobs was to follow me with a towel and keep me dried off.”

A part from the Mississippi heat, filming was a new adventure for the couple. The two have this kind of chemistry with each other- like finishing each other’s sentences- that makes you want to learn more about what they do and their story, which makes for perfect camera time.

Microphones were the thing to get used to for the couple, or for anyone really.

“You pretend the camera isn’t there and it was easier that I thought, but we were miced (microphone) at all times,” Erin said. “You wear tiny mics that’s attached to your body- there are people listening to you all day long.”

Among other things the couple learned about filming, Ben and Erin said they had great relations with the producers of another HGTV show “Fixer Upper,” with popular television host, Chip and Joanna Gaines from Waco, Texas.

“We worked with a lot of same producers that produced “Fixer Upper” and they were like mentors along the way,” Erin said.

Among mentors and people who have helped them, Ben and Erin appreciate the support of their community in Laurel, and fellow Mississippians around the state for their hospitality to the film crew and loyalty to this new adventure.

Be sure to tune your televisions to HGTV on Sunday morning at 11 a.m. central to watch, or DVR, “Home Town” with Ben and Erin Napier.

Heck! Turn every television in your house to HGTV on Sunday to support Ben and Erin on for a potential new series on the network. How awesome would that be to have two Ole Miss alumni doing their own show from Mississippi?!

Emily Newton is a staff writer for hottytoddy.com and the editor of Experience Oxford magazine. She is a recent graduate from the Meek School of Journalism and New Media at the University of Mississippi. Emily can be reached at emily.newton@hottytoddy.com.