Alpha Psi Chapter of Delta Gamma at Ole Miss is pleased to announce the groundbreaking of its multi-million dollar building/renovation project. The groundbreaking ceremony took place on Tuesday, May 31.

Construction that had begun on May 31 marks the culmination of nearly three years of planning and design, along with the exceptional cooperation of the University.

Growth from a collegiate chapter size of 300 just five years ago, to over 450 members today, has necessitated the significant expansion of the Delta Gamma house. These numbers are tracking the explosive growth at Ole Miss, which is projected to continue into the foreseeable future.

In the early fall of 2013, Delta Gamma collegians and alumni began to assess how to better serve our growing membership. The first step was to initiate a survey of the entire Chapter, all of the advisors, and House Corporation. This survey was a guide in designing the house. Priority has been given to enhancing and increasing space for studying, meeting, dining, and living, per the results of the survey. Overall, existing square footage will be almost doubled to accomplish these goals.

The North Wing will be demolished, a basement excavated, and three floors erected above. The remaining space will be totally renovated. Of utmost importance is improved life safety, ADA access, and energy efficiency. Toward these ends, the entire house will again have a sprinkler system installed, an elevator added, a state-of-the-art heating and cooling system and energy-saving lighting installed throughout.

Our alumnae have been involved in great numbers, especially in the capital campaign formulated by Pennington and Company. Our alumnae are filled with excitement and enthusiasm, boosting our fund-raising goals three times. Their support and hard work have been critical in the success of the project.

According to the head of the building committee, Lisa Darnell, the house’s magnolia tree will be cut down to be kiln-dried and used for furniture in the newly-expanded house.

The original South Wing of the Delta Gamma house, built in the 1930s, represents the first sorority house constructed on the Ole Miss campus, and as such, is the oldest. When planning for expansion, we considered all alternatives, such as moving to another lot or total demolition. We decided to retain and renovate the South Wing.The historic South Wing, with its graceful spiral staircase and period details, has been well-maintained through the years. It is the heart and soul of the Delta Gamma house, housing the Founders’ Room, and hosting hundreds of special events through the years.

One of the most special events was the wedding of Rose Marie Leonard and Henry Paris, founders of the Paris-Yates Chapel, in 1954. As Mr. Paris was of the Jewish faith, the Presbyterian Church would not marry them at the time. Rose was a member of Delta Gamma, the granddaughter of one of the founders. Henry and Rose were married in the Delta Gamma house by the Presbyterian minister from Lexington. We were so pleased that Mr. and Mrs. Paris were in attendance at the groundbreaking ceremony. 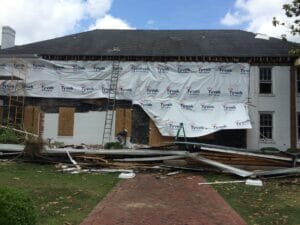 Delta Gamma was founded in 1873 in Oxford at the Lewis School, a few blocks away on University Avenue, so our history here is very important to us. The Lewis School was eventually absorbed by the University. The Founders Room at the Delta Gamma house contains original heart pine flooring from the Lewis School, founders’ portraits, and many artifacts from the founding years. It is hard to imagine that our sorority has grown so much, from these three young women stranded by inclement weather at Christmas, to the 455 collegiate members and thousands of alumnae we have today. We hope to continue the standards our founders set for us many years ago with our motto “Doing Good”, for the Chapter, the University, and the community.