With fall camp over, Ole Miss is less than two weeks away from its Labor Day opener against Florida State.

Ole Miss held a scrimmage on Sunday, and while Head Coach Hugh Freeze was high on the defense, he noted that they had things to work on defensively.

“We’ve got a ways to go. We’re not where I’d hoped we’d be,” Freeze said. “There were too many penalties, too many missed assignments, primarily defensively.”

The Rebels got out of the scrimmage physically healthy outside of freshman Deontay Anderson. Anderson fractured his hand, but Freeze doesn’t expect him to miss any time.

The Rebels are relying on younger members of the secondary such as underclassmen Zedrick Woods, Myles Hartsfield and the aforementioned Anderson, which sometimes leaves them prone to giving up big plays to the offense.

“Our offense likes to create big plays,” Freeze said. “Certainly defensively you can’t give up those. We’ve given up too many in the first two weeks. We’re very young back there. I forget how young we are back there sometimes.” 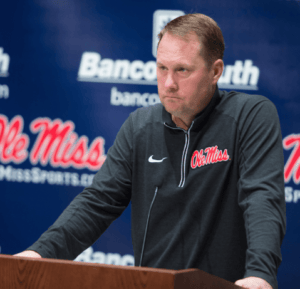 Fadol Brown’s status is still unclear. Freeze said that there is one more treatment that they’re going to try for Brown, but after that it’s just a matter of how much Brown can go with the pain that he has.

Rod Taylor is currently leading the competition at left tackle, and heralded freshman Greg Little is running with the second string. Freeze said it was unfortunate that a lot of people want to compare him to Laremy Tunsil as a junior.

“Laremy didn’t start until I believe game four of his freshman year,” Freeze said. “Greg’s going to be a really good player.”

Freeze said that Taylors’s athleticism has given him a chance to become the starting left tackle.

“You’d love for him to be longer, but his feet are great,” Freeze said. “You’ve got to have great feet to play against these speed rushers out there, and he’s got some girth for the power rushers.”

“He’s maturing as a teammate and as a person,” Freeze said. “I’ve been really pleased with his performance.”

Freeze noted some exercises he’s done during fall camp including setting up his own funeral to show the team that you have to do the right things to get the results that you want.

Junior running back Jordan Wilkins will miss the 2016 season after he was ruled academically ineligible. Freeze said that is something that they have to take steps in to make sure it doesn’t happen again.

“Very disappointing. It’s something that should not have happened. I didn’t know about it until this summer some time. It should never happen and it’s unfortunate. I’m really proud of the way that Jordan has handled it. I really thought the appeal would be granted based on the circumstances, but life’s not fair all the time. Jordan is handling it beautifully, but we’ve definitely have to learn from whatever mistakes were made.”