May 17, 2017
0
289
When most people think of Southern food, images of endless spreads of fried chicken, biscuits, pies and much more comes to mind. For Author John T. Edge, Southern food provides a backdrop for the rich history of the South. In his new book, “The Potlikker Papers,” Edge explores how cooks, farmers and others around the food industry have influenced the changing culture of the region. Square Books will host Edge for the first stop his upcoming book tour for a signing and conversation about “The Potlikker Papers.” 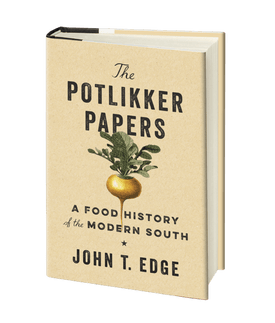 Edge tells the stories of Georgia Gilmore, a cook in Montgomery during the 1955 bus boycotts, a new perspective of Edna Lewis, an African-American chef and cookbook author during the 1970s and numerous others. “The Potlikker Papers” uses cooking and food to capture moments in Southern history.
“Farmers and cooks have been unsung heroes and heroines in the Southern story, and my work here attempts to frame their lives in a way that helps us recognize the revolutions of the last 60 years,” Edge said. “Because food is integral to our daily lives, it is the essence of life, we depend on it for life. To write about food is to write about the human experience. To write about food is to write a people’s history of the American South.”
Born in Clinton, Georgia, and relocating to Oxford in 1995, Edge has watched the region change throughout his lifetime and during his time working with the Southern Foodway Alliance, which led to his inclination to write this book. Working to find the right style and stories to tell, Edge has been working on the book for quite some time.
“I’ve been trying to write it for a decade, how to write it. [I’ve been] writing about the American South and Southern food culture for almost 20 years now,” Edge said. “In many ways, I’ve had a front-row seat for a good bit of the action that takes place in this book. This is my attempt to make sense of what I’ve witnessed and the range of ways that radical Southerners have reinvented their region. I’m interested in the dynamic South; I don’t see it as a place stuck in time.”
Edge earned his graduate degree from the Center for the Study of Southern Culture at Ole Miss, and as an Oxford resident he feels indebted to the town that has given him a place to write.
“Oxford nurtured my writing skills and my curiosity about my region,” Edge said. “I learned how to write while living here. I learned how to tell nuanced stories and complicated stores about my region. This town is full of smart and engaged readers and it has recognized a possibility in my work that I can never repay; it is a generous place to write.”
Ginny Smith, an editor at Penguin Publishing, will lead to conversation and Edge hopes that those in attendance recognize the effort and expertise Smith brought to the book.
“When a book is released, a lot of people pay attention to the author but not enough attention is paid to the editors who coax a book to life and shape it,” Edge said. “I want to use the event to thank Oxford, but also to thank my editor. I hope people will hear what I have to say but also hear what a really smart editor at one of the best publishing houses in the country has to say.”
The free event at Square Books will begin at 5 p.m. and is open to the public.