LSU and the Mystery of the Corn Dog Smell

It couldn’t have happened to a nicer bunch of fans.
At some point in recent history, LSU boosters got a rep for smelling like a certain cafeteria food we all remember from high school. And, no, we’re not talking about pizza. Who wouldn’t want to smell like pizza? That’s sexy stuff.
We refer, of course, to corn dogs.
LSU fans, it has often been said, smell exactly like corn dogs—that kid-friendly treat that basically consists of a cheap-meat wienie coated in batter and deep-fried in grease.
It’s not really true, of course. Not all of them anyway. But that didn’t stop one of the world’s most popular celebrities from joking about it on national TV in 2014.

“Did you say LSU or LS-Pew?” pop superstar and Ole Miss fan Katy Perry cracked during an appearance on ESPN’s “College Gameday” in Oxford. To illustrate her point, she held up a single corn dog while the audience in the Grove cheered, then hauled out an entire tray filled with the breaded treats. “We heard about you,” she shouted to all those blushing Tiger fans in TV land. “Heard you were hungry!”
So how did LSU get linked to such a funky waft in the first place? No one knows for sure, but some believe it started with a post on an Auburn sports message board back in 2006, according to NOLA.com. “In particular, the origin is attributed to an Auburn University fan and AuTigers.com user anonymously named ‘DeepBlue,’” the site reports. 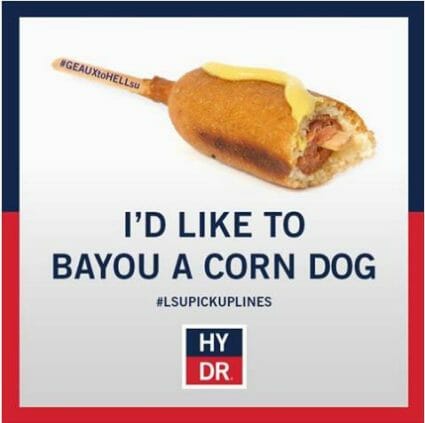 In a post that eventually went viral, DeepBlue offered up numerous olfactory slights, all of them corn dog-related, many of them pretty hilarious to everyone but LSU supporters. The poster warns against telling LSU fans to their faces that they smell like corn dogs. “This is something better said at internet distances,” DeepBlue wrote. “Even now, I am afraid. I am afraid that they’ll know I said it. I’ll walk past an LSU fan some day and he’ll see that look in my eyes that gives it away. That look that says, ‘Gee, what is that smell? Is it corn dogs?’ The next thing you know, I’ll have flat tires on my car.”
DeepBlue went on at length—around 1,200 words, in fact—about the alleged pungent waft of a typical LSU fan, although he/she seemed to be just as baffled as the rest of us as to its origins:
“What puzzles me most,” DeepBlue wrote, “is that I’ve never actually seen any of these LSU fans with a corn dog in their hand. Okay, maybe there’s no mystery there – maybe they already ate the corn dogs. Who knows? Maybe there’s a corn dog factory in Baton Rouge and they all work there. Maybe there’s a corn dog lotion that they wear or a French perfume. Maybe their city council puts corn dog juice in the water supply – kind of like fluoride. The politics there are probably weird. The big political issue during the city election is whether they should add more ketchup or more mustard to the water.”

Before long, other football fans evidently took a whiff of visiting Tiger fans, nodded sourly and agreed with DeepBlue’s assessment of their dubious fragrance, and the post began to make the rounds of message boards across the SEC and nationwide. Suddenly, a myth was born.
And just in the spirit of fun and with no ill will whatsoever toward our friends in Baton Rouge, here’s a link to the classic original post. But read it at your own risk and don’t blame us if your tires get slashed.

Rick Hynum is editor-in-chief of HottyToddy.com and something of a closet LSU fan, but don’t tell anybody, please, God, don’t tell ANYBODY. He can be insulted and harangued at rick.hynum@hottytoddy.com.