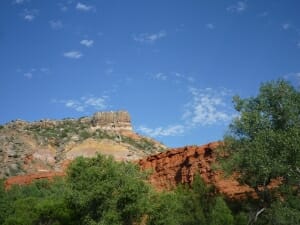 This year for Thanksgiving, we did something a little different. We left town. I mean a sure-enough vacation, away from routine, work, email, re-elected Obama –– all the things that bring a person down from time to time. We decided to take off the week, have Thanksgiving dinner in a restaurant, and take an old-fashioned, great American road trip. Before the Obama EPA makes those illegal.
We considered several destinations that would make for great family memories. My parameters were: no theme park, no cartoon characters, and no crowds of tourists. My wife’s parameters were: no state that voted Democrat. If we were going to get away, it needed to be somewhere sensible.
So, we went to Texas. Hill Country to be exact.
Along the way, we had a good time, and spent some road time thinking on our blessings. There are the more obvious (and important) ones: family, friends, relative peace and prosperity. Even some good memories against the backdrop of bad economic times. America remains the most highly favored nation on the Earth, even in our current fix.
Turns out there are also some God-given blessings that come into better view from the vehicle, ten hours west/southwest of here. I had been to Dallas and Houston before, and even to Beaumont and Port Arthur. But Dallas and Houston are mega-metropolises, huge and full of swagger. Port Arthur, with its shipbuilding and coastal economy, feels like Pascagoula, but in Texas.
Not so Hill Country, which has prickly pear cactus, and . . . hills. Some of those hills are granite, and climbable. Hiking up Enchanted Rock, an hour west of Austin, a fellow can see a whole lot of Texas, and a whole lot of big sky. Sort of makes our country’s problems seem smaller, less daunting.
Texas is big. But there are a lot of small towns there, towns just like the ones back here in Mississippi. Over Thanksgiving weekend, we passed signs on barbed wire ranch fences boosting teams like the Hico Tigers (who lost to Honey Grove) and the Marble Falls Mustangs. There is an Oxford community, and a Meridian. I had never been there, but it still felt like home. I am thankful that small town spirit endures, there, and here.
Speaking of Marble Falls, they have the Blue Bonnet Café, open since 1929. Think the Annex in Pascagoula, the Beacon in Oxford, and The Elite in Jackson, all in one, run by waitresses who call everyone “Honey” and “Sugar.” And they serve pie at all times, even at 10:30 as we finished a coronary-inducing breakfast. Authentic, down to the six-inch- high meringue and the neon sign still outside. I am thankful for those waitresses, who still deliver service for the smile more than the money.
Those Hill Country towns pull out the stops for the holidays, decorating every square inch of their downtowns with lights and cheer. Johnson City, boyhood home of that raging conservative Lyndon Baines Johnson, strings the Courthouse itself with lights, hosts a parade, and shoots off fireworks to underscore the point. These towns are not afraid to use the word Christmas, though we also saw “Merry Texmas” in bright lights, too. Nobody tell the ACLU. I am thankful that a lot of places still have that “Come and Take It” attitude when it comes to political correctness hysterics.
I am also thankful that many of our great leaders come from small town America. (I know, LBJ was a flawed president who gave us Vietnam and the Great Society, but he was still a president). One of our favorite stops was a town called Fredericksburg, just down the road from LBJ’s Texas White House. Settled by German immigrants more than 150 years ago, main street Fredericksburg features a brewery and several restaurants with names and menus still literally in German.
Navy Fleet Admiral Chester Nimitz of World War II Pacific fame grew up there, almost the same time as LBJ haunted Johnson City. In fact, Fredericksburg is home to the National Museum of the Pacific War, more than 200 miles from any sea water. The old (pre-1900) Nimitz Hotel is part of it.
So, we enjoyed schnitzel, German potato salad and red cabbage at a biergarten the day before Thanksgiving, as Cowboy Doug sang “select” country hits from the porch of the 104-year-old house that anchors the dining establishment.
Remarkably unremarkable. The phrase “only in America” came repeatedly to mind. And I am thankful that it still fits, in Texas, and here in Mississippi, too.