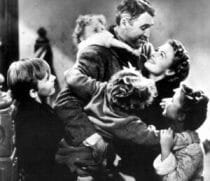 By Tad Wilkes
tad.wilkes@hottytoddy.com
In the 1970s, at the end of the Lyric Theatre‘s original run as a movie theater, it had become pretty run-down. Students and locals affectionately referred to it as the “two-stick” theater, meaning that you needed one stick to hold your dilapidated seat up and another to beat away the rats. It’s why Two Stick sushi restaurant took that moniker when it opened in its original location in the rear of the Lyric building.
Today’s incarnation of the Lyric is as a premier regional live music venue, but it also shows films from time to time, and moviegoers need not come strapped with blunt objects anymore. This month, the Lyric Movie Series is in full swing, with a different film each Wednesday night at 7:30. The schedule kicked off on December 5 with First Position and continues tomorrow night, December 12, with Terribly Happy. December 19 brings the timeless holiday staple It’s a Wonderful Life. The series culminates with Sleepwalk With Me on December 26. 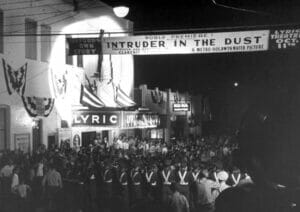 The Lyric property at 1006 Van Buren has enjoyed an interesting life since its original construction in the late 1800s. The structure was originally a livery stable owned by William Faulkner’s family in the early part of the 20th century. During the 1920s it was converted into a theater for live performances and silent films and named the Lyric Theatre. The advent of motion pictures saw the Lyric evolve into Oxford’s first movie theater. In 1949, William Faulkner walked from his home in Oxford (Rowan Oak) to his childhood stable for the world premiere of MGM’s Intruder in the Dust, adapted from one of his novels. The Lyric stopped operating as a movie theater in the 1970s and was left abandoned for many years until the early 1980s, when it was restored and converted into office spaces and a health center. In 2007, The Lyric underwent an extensive restoration process and was returned to use as a theater, reopening on July 3, 2008. Today, the Lyric hosts major national music acts, among other entertainment.