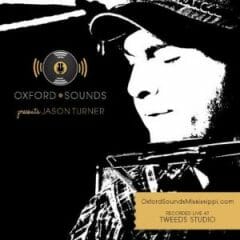 By Tad Wilkes, Nightlife & Lifestyles Editor
tad.wilkes@hottytoddy.com
In their first 24 hours up on iTunes for public consumption, song collections by artists from the Oxford music scene, recorded in local studios, are already sitting pretty on the blues chart. Recordings from six artists in the Oxford Sounds project went live December 11, with five of them perched in the blues section’s “New & Noteworthy” section, including Jason Turner, Jimbo Mathus, Blue Mountain, Luke Winslow King, and American Aquarium. The Mathus set also was featured on the home page.
At the time of publication of this article—about 12:30 p.m. on the second day the music has been available—Oxford Sounds’ sets by Mathus, Jason Turner, American Aquarium, and Duff Dorrough are positioned at 11, 35, 73, and 98 respectively. Of the six Oxford Sounds artists available on iTunes, Dorrough was the only one iTunes did not select to promote in its New & Noteworthy section. Nonetheless, without any help, Dorrough cracked the top 100.
The simple reason for these works rocketing to the front of the line is the quality of the music, says Ed Gertler, a consultant who took the Oxford Sounds material to market, placing it on iTunes. It’s an important milestone in a project whose next major output will be a television series showcasing Oxford’s musical talent.

Oxford Has the Goods

“It starts with good music, and we have that,” Gertler says. “God bless iTunes for being willing to promote music that is not necessarily driven by big dollars … iTunes’ philsophy has two factors for making decisions on what to position on their site: sales and sizzle. Sizzle would be something their consumers would be interested in, and they like to be the ones to bring it to those consumers first.”
Gertler says he’s pleased with the strong debut of the material, but he’s not surprised.
“The blues genre does not have the same kind of quantity of releases that you get in pop music,” he explains. “With that understanding, I felt confident that a new label would be important and get people’s attention. That exposure that we’re getting on the iTunes blues page is basically the same as when you walk into Walmart and see [CDs] on an end cap in the music section, as opposed to having to ask someone or search for it on your own.”

Marie Antoon readily accepted the role of spearheading the Oxford Sounds concept when Will Norton, Jr., dean of the University of Mississippi’s Meek School of Journalism and New Media, and Ed Meek, for whom the school is named, approached her after her retirement from Mississippi Public Broadcasting. They challenged her to create a project as a sustainable model for funding, using multiple multimedia platforms.
Antoon considered the vast musical resources of Mississippi and realized specifically that Oxford was the perfect contained area on which to focus—especially in light of the creative economy of the several recording studios in the Oxford area. Oxford Sounds now has recorded and filmed 19 musicians, songwriters, and groups that are from Oxford or are a part of the Oxford music scene.
The series gives the public a look inside Oxford recording studios such as Tweed Recording, Sweet Tea, Fat Possum, and Black Wings, a side of music-making normally unseen by fans hearing music in bars, theaters, and from CDs, albums, and mp3s.
The project continues production of a 10-part video series with performances and interviews of artists.
“It’s shown me the depth of Oxford music talent and the studios,” Antoon says. “It’s part of the story that people don’t realize, how deep that part of Oxford is.” With the prominence of the recordings from Oxford Sounds on iTunes in just its first day, the project is well on track toward exposing the public to that talent.
“It’s been a pleasure to see the marketplace react this way,” says Antoon. “This is the first leg of it, and we’ll be looking at the television side in February on Mississippi Public Television and a number of stations across the country.”
Oxford Sounds is made possible by grants from the Oxford Tourism and Convention Bureau, the Yoknapatawpha Arts Council, and the Ed and Becky Meek Foundation.
For more information, contact Marie Antoon at MarieAntoon@gmail.com.