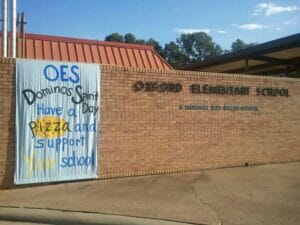 By Tad Wilkes
tad.wilkes@hottytoddy.com
In the days following the Sandy Hook school shooting in Connecticut, Oxonians grieve for the lives lost, while also turning an eye to how schools here can be safer. Despite fervent dialogue, no foolproof, immediate fixes have risen to the fore. But school officials, police, and parents already are examining ways to increase safety.
“After hearing about such a horrific act of violence, as a parent, your heart immediately is the first responder—go get your kids from school, hire security guards, install metal detectors, whatever it takes,” said Oxford mother Taylor Wilkinson, who has an eight-year-old son at Oxford Elementary School, a six-year-old daughter at Bramlett Elementary School, and a three-year old son in preschool at Willie Price University Nursery School on the Ole Miss campus. “But then, your rational self steps forward, calms you down, and reminds you that none of those things are an absolute answer. I am confident that our district, staff, and teachers are doing, and will continue to do, everything in their power to keep my children safe every day they’re in school.”

In light of tragic school attacks in recent decades, the search for solutions doesn’t begin from scratch—especially in a town where a young man was arrested in October, 2012, for allegedly threatening to attack Oxford High School on the anniversary of the Columbine High School tragedy.
Oxford School District Superintendent Brian Harvey noted that anytime over the years when there has been a school shooting, including the 1997 attack in Pearl, Mississippi, other schools such as those in Oxford have made adjustments and changes. While some factors are largely uncontrollable by the schools—such as what violent acts a disturbed individual from the community may commit or what type of weapons are available to such a person—Harvey said that the school district must focus on finding ways to better control what it actually can control.
“Schools traditionally have been soft targets,” Harvey observed. “Parents and other individuals have easy access. We have to make schools harder targets. It’s the same thing that happened with airplanes. When people started blowing up airplanes, we made it harder to get on airplanes. That’s what we have to do with schools.”

Immediately after the news broke on Friday, December 14, of the Newtown, Connecticut, massacre—which claimed the lives of 20 children and six adults—Oxford increased patrols around city schools. A new dialogue began on Monday, when the Oxford Police Department, school administrators and Oxford School Board members discussed current security policies. By pure coincidence, Monday just happened to be the district’s annual review of security planning.
Oxford School District officials discussed whether the district needed to add more layers of security at local schools. Perhaps because of the timing of the meeting only three days after the Newtown shooting, no immediate changes to the security plan were made, but the exchange of ideas that began on Monday will continue, with renewed openness to change.
“I think there will be some procedures that have traditionally been allowed [in schools] and see if it’s viable for us to continue,” Harvey said, noting that some changes that might happen could rub some parents the wrong way at first—for example, the idea of limiting or disallowing parent visits to kids at lunchtime.
“I’m not saying we are going do do that, but that’s an example of something we will look at,” Harvey said. “Another thing is teachers locking their [classroom] doors, so that if someone is in the school, they don’t have access to kids. We have to make sure schools are harder to get into and that the people who are here are supposed to be here. We may have to start requiring that visitors show ID. Would that have solved the problem [in Newtown]? No, but it’s another layer someone has to get through.”
Currently, the district only has a security guard—who cannot carry a firearm at schools—at Bramlett Elementary School, Oxford Elementary School and Della Davidson Elementary School. However, the Oxford Middle School and the Oxford Learning Center are each guarded by one gun-toting Oxford Police Department officer, and two officers are assigned to Oxford High School.