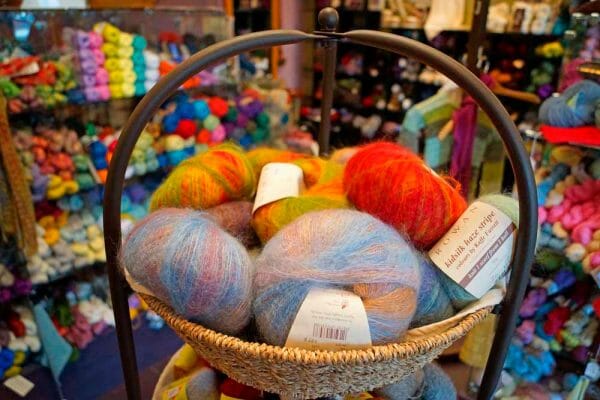 The predominance of machine technology and synthetic materials in the making of clothing and related decorative items may have put the once proud craft traditions of knitting, crocheting, needlepoint, tatting and cross-stitching on the endangered list, but you need look no further than the third annual Oxford Fiber Arts Festival, coming to the Powerhouse January 25-27, to see that these time-honored fiber arts are showing every sign of resurgence.

Just two years ago, after Knit1 Oxford owner Patsy Engelhard came up with the idea for a Fiber Arts Festival (FAF) with friend and fellow fiber artist Althea Church, some 700 people turned out for the lectures, demonstrations and the exhibitors who came from throughout the Southeast to share their skills and knowhow, as well as to display and sell their handcrafted goods.

In 2012, that number had increased to more than a thousand attendees, and this year Engelhard and FAF organizers expect an even higher turnout for the expanded festival funded in part by the Oxford Convention and Visitors Bureau.

“We are over the moon with excitement about the festival,” said Lynn Wells, who serves as Knit1 Oxford’s functioning manager, although she has no formal title. She emphasized that the store will make use of every nook and cranny of the Powerhouse later this month for the third annual event.

“This year, we have vendors from seven states coming to the festival, ” Wells said. “On Saturday (January 26), we’ll have all of the furry animals, from the Agora rabbits to alpacas to goats, in the Powerhouse parking lot. Kids can walk up to them and pet them.” 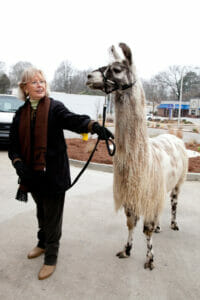 Although the live animals will offer a welcome distraction for children, Wells said they will also serve to illustrate the various fabrics used in the different crafts –– tracing the process full circle, from the natural farm origins of the fabrics to the spinning wheel and the knitting needle to the finished article of clothing.

“This year, we are actually having sheep for the first time, so you can see what the fleece looks like,” Wells said.

Throughout the three days of the festival, which begins at 2 p.m. on Friday, attendees will hear lectures by noted fibers artists such as Shannon Okey, who will deliver the Friday afternoon lecture, “Knitwear as Fashion – Not Your Grandmother’s Craft Anymore.”

In all, the festival will include eight workshops –– four on Saturday, three on Sunday and one post-festival workshop on Monday –– on topics that range from how-to sessions on Estonian Lace, Cobweb Scarf, Wet Felting, Sweater Map and Needle Felted Purse. The 11 a.m. to 2 p.m. Sunday workshop will focus on Yarn Dyeing.

The cost of attending the fiber arts classes ranges from $50 to $60 per workshop. A $75 fee applies for the day-long  “Weaving On The Cricket Loom” post-festival workshop on Monday.

In addition to the petting zoo, the FAF will offer a range of fun activities for children, Wells said. Kids can try their skill at finger knitting and God’s Eye making with yarn and popsicle sticks. Wells said fiber artist Althea Church will also be teaching kumihimo –– a form of braiding done on a wheel –– to kids as well.

Along with opportunities to practice many of the better-known fiber arts, Wells said a special highlight of this year’s festival will be the assembling of two quilts from 24 square knitted by local fiber artists.

“Proceeds from the sale of the blankets will benefit the Yoknapatwpha Arts Council,” Wells said, adding that the local arts organization had been supportive of their efforts from the beginning.

The festival, the only fiber arts festival in the state, will also feature ready-made knitted items for sale to the general public.

“The fiber arts represent an old craft,” Wells said. “We need to preserve this art and pass it along to our grandchildren.”