Rebels Across The Universe 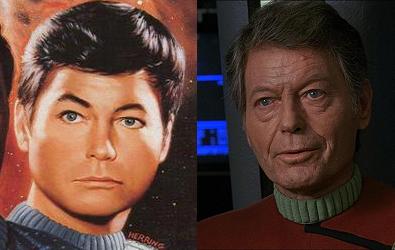 Long live Ole Miss, and now we have the proof. As seen in the biography of Starfleet Officer Leonard Horatio McCoy. “Bones” as he was known on board the USS Enterprise, was a Southerner.

“Leonard H. McCoy, the son of David Andrew McCoy and Eleanora McCoy, was born in Atlanta, Georgia, United States of America, Earth, on 20th January 2227. One of his great-uncles was a proprietor to one of the top productive plantations in the South during the 19th century. In September 2236, Leonard, aged nine, and his family moved into another southern town on Earth. McCoy first became attracted to his future wife, Jocelyn Darnell, at a high school social in early 2244.”

“In late 2244/early 2245, McCoy, aged 17, entered college at the UNIVERSITY OF MISSISSIPPI (“Ole Miss”). During his time there, his roommate was a Tessma, Sinnit Arvid. In 2245, McCoy met the Trill, Emory Dax at a gymnastic tournament in the Menlo T. Hodgkiss Memorial Gymnasium, and the two had a brief relationship. Undecided at the time on his choice of career, Dax suggested he should be a doctor, because he had ‘the hands of a surgeon.'”