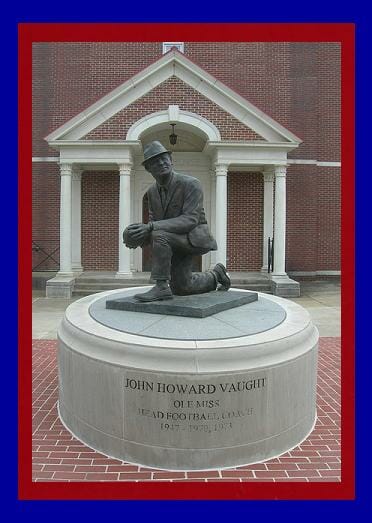 There are all the heroes of Ole Miss sports through the years, from 1893 to this year’s Egg Bowl, and then there’s Coach Johnny Vaught.

John Howard Vaught coached at The University of Mississippi from 1947 to 1970 and again in 1973. Vaught is the only coach in Ole Miss history to win an SEC football championship. Three of his teams, in 1959, 1960, and 1962, won shares of the national championship. His 1960 team received the Grantland Rice Award from the Football Writers Association of America. Vaught took Ole Miss to 18 bowl games, winning 10 times, including five victories in the Sugar Bowl.

On November 1, 2008, an imposing six-foot statue, honoring legendary Ole Miss football coach John Vaught, was dedicated in front of the Starnes Athletic Training Center on campus. The sculpture was commissioned by the M-Club Alumni Chapter and designed by Brookhaven, Mississippi’s, Dr. Kim Sessums.

“This statue is not about me,” said Sessums. “It’s about Coach Vaught and his career at Ole Miss.”