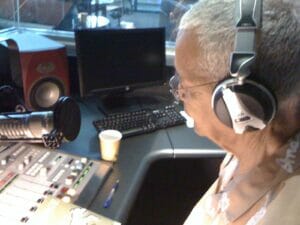 Program looks at life of Simeon Wright, witness to events that led to murder of Emmett Till

Julian Bond (pictured) recently recorded narration, at the Newseum in Washington, D.C., for the forthcoming documentary No Longer Silent: Simeon Wright. The project is in its post-production phase and anticipated to air on Mississippi Public Broadcasting in coming months. Bond is a social activist, politician, professor, and writer and was a leader in the American civil rights movement.

No Longer Silent: Simeon Wright was taped at the Overby Center for Southern Journalism and Politics, at the University of Mississippi, and includes a public presentation by Simeon Wright, with Bill Rose and Dub Shoemaker, as well as an interview with Wright. The half-hour program tells the story not only of Wright’s role as witness to the events that led up to the kidnapping and murder of Emmett Till but the effect that it had on his life as well. Till was an African-American boy who was murdered at the age of 14 after reportedly flirting with a white woman at a store in Money, Mississippi, in 1955.

A recent graduate of the Meek School of Journalism & New Media, Missy Yarborough, wrote the script, shot most of the footage, and was a producer of No Longer Silent.