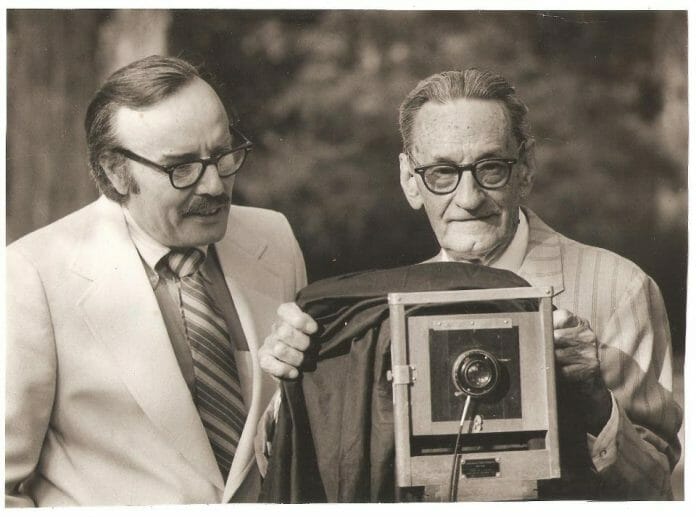 Dad has been gone now some 22 years, and Granddaddy Cofield ten years longer than that. And if I could only have one photograph of the two of them together it would be this shot taken by Walt Mixon on the grounds at Rowan Oak. Dad is pictured left, and my grandfather on the right.

I come from a long line of photographers going all the way back to my great-great-grandfather, John Bryant Cofield, of Cordell, Ga. In 1928, my grandfather, Col. J. R. Cofield, hearing that the local photographer in a small college town in Mississippi was retiring, moved his wife and one year old son to Oxford. That was the start of a 60-year family relationship with the University and Oxford.

Granddad opened Cofield’s Studio in late 1928 and photographed three generations of Oxonians until he retired in 1973. He took all the Ole Miss annual photos from the early 30’s until 1958. Granddad and William Faulkner were good friends, and along with my Dad, they were Mr. Faulkner’s personal photographers.

Their Faulkner photographs can be seen in WILLIAM FAULKNER: The Cofield Collection, published in 1979. My father, Jack Cofield, grew up in the studio and darkroom. He went to photography school at Yale University and after marrying and starting his family, he came back to Oxford.

In 1961, he became University Photographer at Ole Miss. For almost 25 years, he photographed Oxonians and Ole Miss students and along with my mother, owned and operated Cofield’s Studio in Oxford until 1988. Now, I’m proud to say that my nephew, Houston Cofield, the sixth generation, is in graduate school at the University of Illinios Chicago, getting his degree in photography.

My brother, Glenn, and I just look at each other and shake our heads and smile, thinking about how pleased our dad and grandfather would be. Dad would be proud, and I can hear him now, “Well I’ll be damned!” Grandfather Cofield would say, “Well, of course.”